Most markets started the weekly slowly as participants focussed on Tuesday’s release of American inflation. However, the pound received a boost from generally strong job data. This preview of weekly data looks at EURUSD and GBPJPY in the runup to US CPI and other significant releases in the next few days.

The European Central Bank and the Bank of Canada called for triple hikes last week while the Reserve Bank of Australia announced a double hike, all as expected and with further hawkish policy likely over the next few months. The chance of a triple hike by the Fed on 21 September is now around 85%, but American annual inflation might drive participants to price this in less if the figure decreases more than expected. Thursday’s scheduled meeting of the Bank of England has been postponed by a week due to mourning for Queen Elizabeth II.

US CPI then is the key release on Tuesday 13 September at 12.30 GMT. Traders are also looking ahead to British inflation, American PPI and Japanese balance of trade on Wednesday followed by retail sales from the USA and the UK on Thursday and Friday respectively. The primary focus of participants this week is on how lower expectations for inflation might affect the critical upcoming meeting of the Fed. 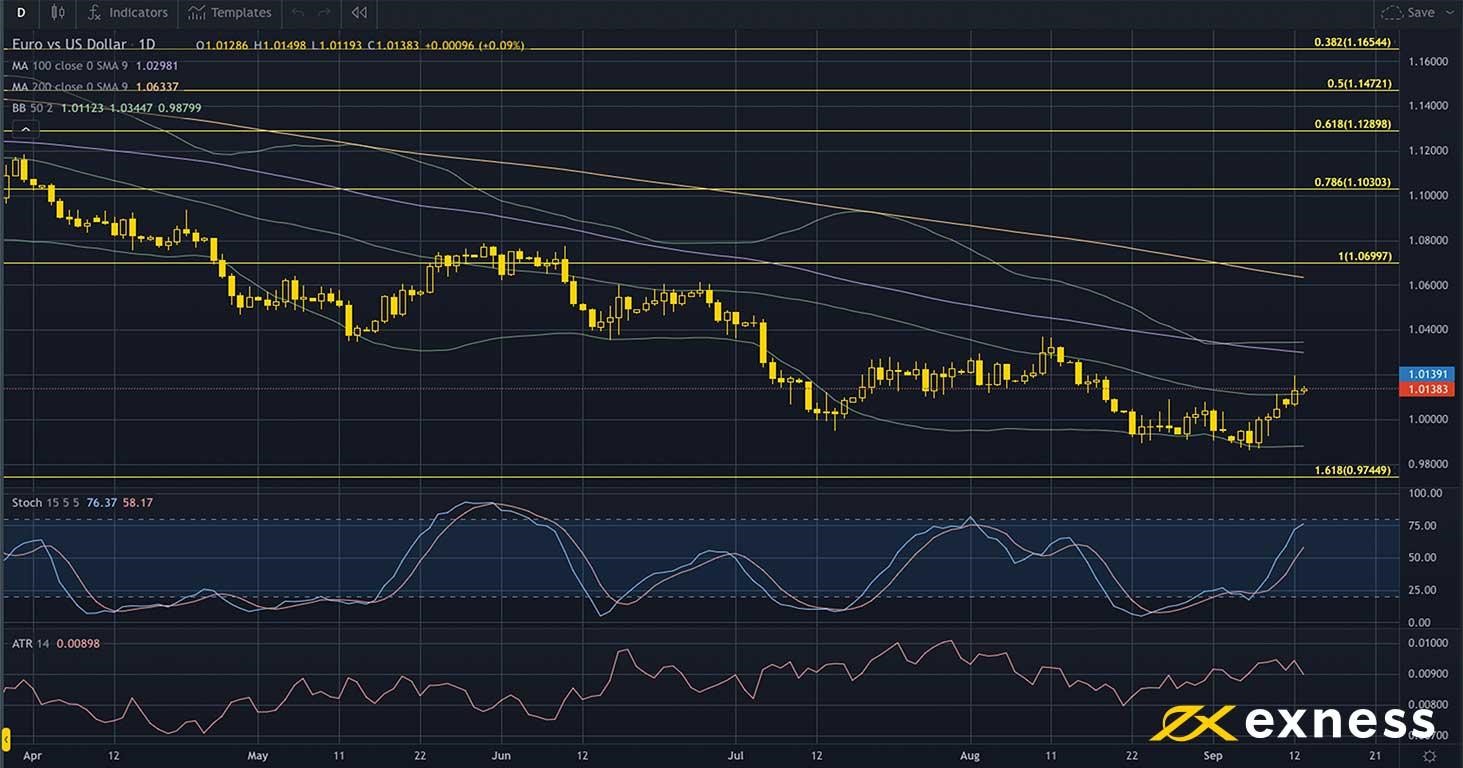 Although there is ongoing concern of a possibly sustained recession in the eurozone, greater positivity has come recently from apparent Ukrainian military successes and seemingly lower possibility of this phase of the Russo-Ukrainian war dragging on into 2023. The ECB was very hawkish last week, with comments from national central banks in the aftermath also stressing that the costs of borrowing will need to increase further unless inflation starts to subside clearly.

Meanwhile a triple hike by the Fed next week seems to be almost completely priced in. Considering sentiment in general, peak demand for the dollar might have passed for now. There is fairly clear evidence of inflationary pressure in the USA decreasing, which seems to reduce the chance of the most hawkish scenarios for the Fed by the end of the year, again for now.

The situation on the chart has followed these changing fundamentals quite closely, with the euro making gains over the last week to a high of around a month, breaking clearly above $1.01 and the 50-day moving average from Bands. There seems to be more scope for the common currency to continue upward and possibly test the 100 SMA depending on the figure for US CPI, but traders will probably monitor saturation given how close the slow stochastic is to the overbought zone. 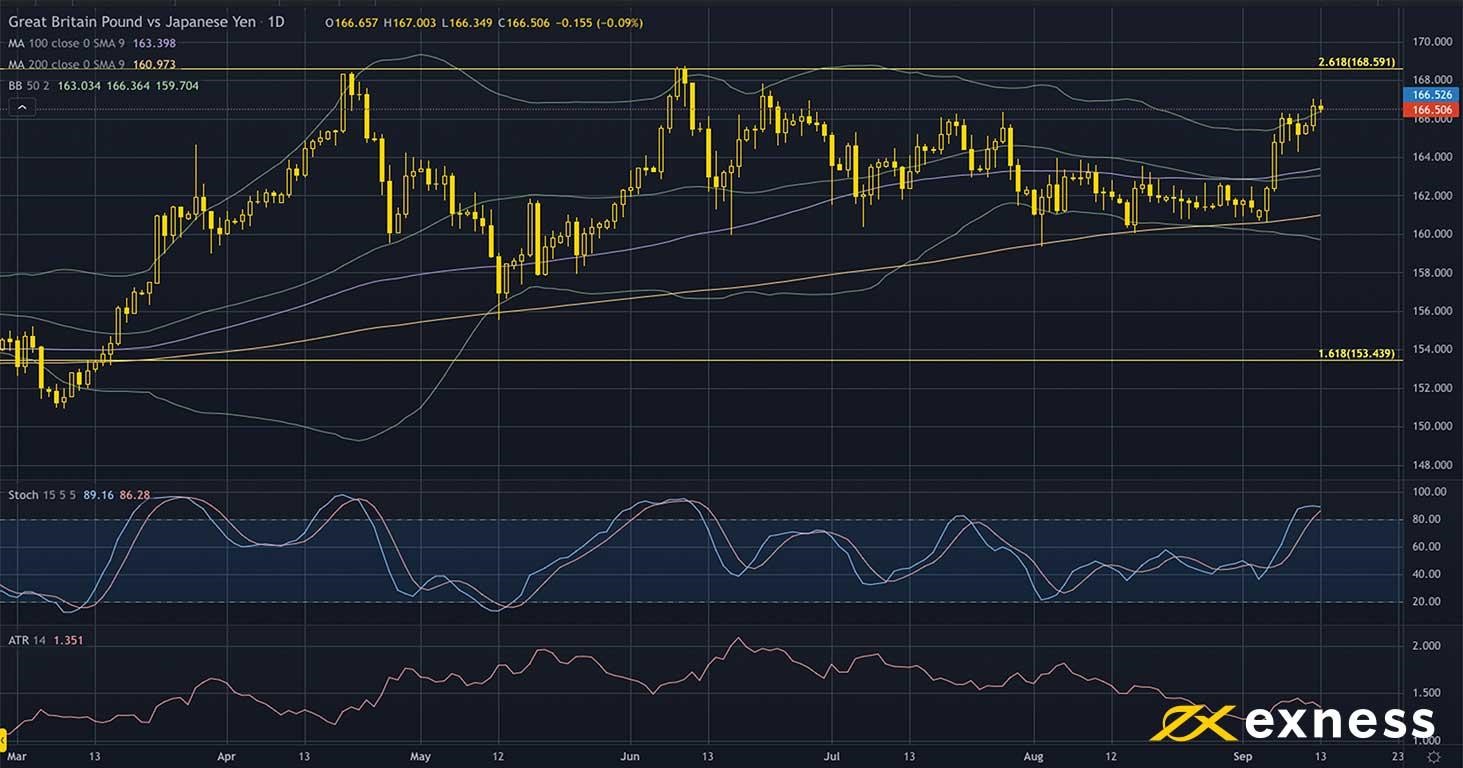 That British inflation hasn’t slowed down in recent months but actually continued to accelerate as the BoE predicted in spring has raised the possibility of more aggressive tightening. This is supported by the ECB’s strong hikes in the last few months. While the possibly upcoming recession in the UK is expected to last more than a year, so far there’s no sign of a technical recession, with the first negative growth since 2020 being last quarter’s negligible 0.1% according to preliminary data.

So far, there are no specific details on the measures being considered by the Japanese government to counter the yen’s sharp decline this year. Japanese inflation reached an eight-year high last month at 2.6%, but this is unlikely to shift the Bank of Japan’s policy immediately, so the gap between it and other major central banks will probably continue widening into winter.

Based on TA alone, the pound’s scope to move up here is quite limited. ¥168.60 seems to be a very strong area of resistance, being the peak from April and June and coinciding with the 261.8% weekly Fibonacci extension. Second and subsequent tests are usually weaker, so it would probably require an intensification of negative sentiment on the yen or significantly less gloomy projections from the BoE for a breakout above there.

Traditionally, traders in this situation might wait for a retracement to the value area between the 50 and 100 SMAs before buying in the belief that the main resistance would be retested. However, this depends a lot on Wednesday’s British inflation and of course next week’s meeting of the BoE.