Bitcoin rose 3.5% on Tuesday, ending the day around $20,400, but continued pressure on risky assets in Asia brought the price of the first cryptocurrency back below $20,000 on Wednesday morning. Ethereum has lost 3% in the past 24 hours, with prices for the leading altcoins ranging from -3.1% (DogeCoin) to -1% (BNB). 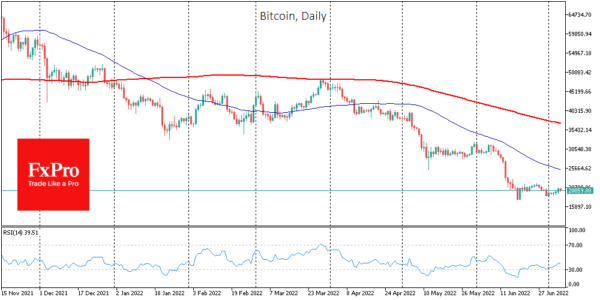 The Cryptocurrency Fear and Greed Index was down 1 point to 18 by Wednesday and remains in a state of “extreme fear”.

The “Squeeze” Indicator That Points to Obscene Profit Potential

On the other hand, Bitcoin is historically relatively cheap, attracting the interest of long-term buyers. However, it is still tricky for anything more than the formation of a bottom. It will probably take months before a rally, as we saw in 2020, starts.

BTC could fall another 20-40% by the end of the summer, according to Cane Island Alternative Advisors. The US economy is entering a recessionary phase, and capital will leave risky assets accordingly.

The massive fall in cryptocurrency has led to the flight of “market tourists” and margin traders. Only the most committed enthusiasts remain, according to Glassnode. Meanwhile, HODLers continue to accumulate bitcoins.

According to The Telegraph, electric car maker Tesla suffered a loss of $440 million due to the bitcoin collapse. The company invested $1.5 billion in bitcoin in early 2021.

According to Charles Erith, CEO of investment firm ByteTree, bitcoin and gold are the best insurance against economic shocks during inflation.

The European Central Bank (ECB) has demanded that EU countries comply with uniform standards when drafting national laws to regulate the cryptocurrency industry.

Carving Out a Market Bottom? This Roadmap Indicator Has the Answer