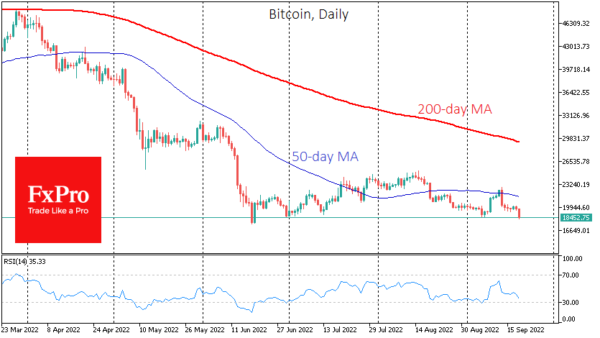 Total crypto market capitalisation, according to CoinMarketCap, was down 14% for the week at $903bn. The cryptocurrency Fear & Greed Index returned to “extreme fear” territory at 21 by Monday.

Flee from risks in global markets has pressured Bitcoin over the past week. Ethereum has underperformed, quickly taking back the speculative advantage accumulated before the move to PoS.

The local technical picture in BTCUSD looks quite worrying. The pair has fallen to the lows of June, where it spent a few hours during the long squeeze.

Balance of trade and central banks ahead of the NFP LeapRate

Bitcoin’s main fall came Tuesday on higher-than-expected US inflation, raising the possibility of a sharper monetary policy tightening at this week’s Fed meeting.

The bear market was confirmed by BTCUSD actively selling off after testing the significant moving averages – the 50-day and 200-week moving averages. The latter, which had previously confirmed that the crypto market was growing over the long term, capitulated in June. And in recent months has acted as a selling point from which to intensify, convincing investors that the 10k mark of Bitcoin will be seen sooner than the 30k mark. 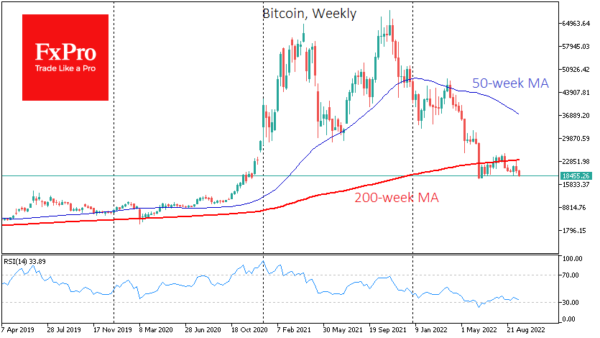 Ethereum’s transition to the new algorithm last week was a success, with the network’s power consumption reduced by 99.95%. However, the hopes of crypto bulls, expecting a rise in quotations, were not fulfilled.

Changpeng Zhao, CEO of cryptocurrency exchange Binance, urged traders to be patient. In his view, the move to PoS should not be expected to impact the Ethereum ecosystem immediately.

US Securities and Exchange Commission (SEC) chief Gary Gensler has warned after The Merge update ETH can be treated as security from a legal perspective.

Nassim Taleb, the author of Black Swan, called bitcoin a “tumour” caused by the US Federal Reserve’s loose monetary policy. In his view, 15 years of low-interest rates ruined the economy and created bubbles in the market, like BTC.

What Is an NFT Trader, and What Are NFT Trader Fees?

The U.S. dollar plummeted on Friday. What about the Yen?