BoJ Unwilling to Hike to Defend the Value of the Yen

Earlier this morning Bank of Japan (BoJ) board member Seiji Adachi reiterated the Bank’s accommodative stance despite the most recent CPI print breaching the 2% target. Japan has witnessed a massive devaluation of its currency since the start of the Ukraine invasion as it relies heavily on Russia for domestic oil consumption, around 70%, which has rendered the island nation susceptible to elevated oil prices.

The weaker yen was initially welcomed by BoJ officials as it benefitted Japanese company profits and resulted in more competitive exports. The latest CPI print underscores the issue of rising prices which are hitting households’ disposable income. Taking a deeper look at the various measures of inflation, the Bank understands that the majority of price increases are attributed to surging commodity prices and not a result of an overheating economy. When viewed without elevated fuel and food costs, inflation measured around 0.8% for April, much less than what the inclusive measures have revealed.

Taking a look at the US dominated event risk this week we have ADP private employment data and continuous jobless claims along with speeches from the Fed. Tomorrow however, we have the NFP data and US services PMI. I believe job figures in the US will attract more attention over the coming months as signs of economic fragility have surfaced in the local economy which are not anticipated to derail the Feds aggressive rate hiking path. That’s a different story of the strong job market starts to unravel. Lastly, services PMI data will also garner a lot of attention as it’s an indicator of economic performance in the United State’s largest sector. 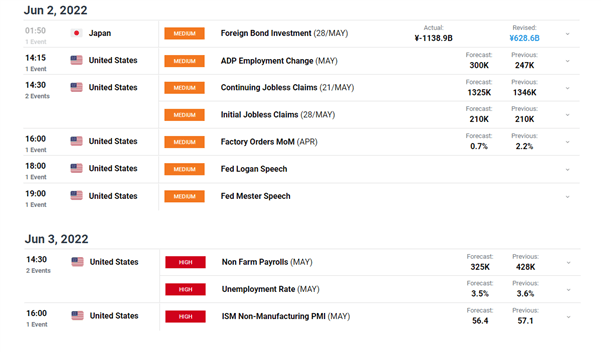 The 50 day simple moving average (SMA) offered dynamic support to USD/JPY as the USD relief rally appears to be reverting towards the longer term bullish trend. This morning we witness what looks like near-term consolidation around the psychologically important 130 level. However, 130 may not prove to be that significant this time around as Bank of Japan (BoJ) board member Seiji Adachi mentioned the Bank would not raise rates to stem the recent yen depreciation, citing a strong yen as a contributing factor of Japan’s prolonged period of deflation or the “two ‘lost’ decades”.

Therefore, with the dollar gaining traction once again, we could see a break above 130 towards the prior double top around 131.35. That being said, it wouldn’t be unusual to see a pullback from here towards the prior high of 129.40 before retesting 130.

Should prices move lower from here, the next major level of support comes in at 126.95 – the prior low and level around which price action hovered before the recent bullish move. 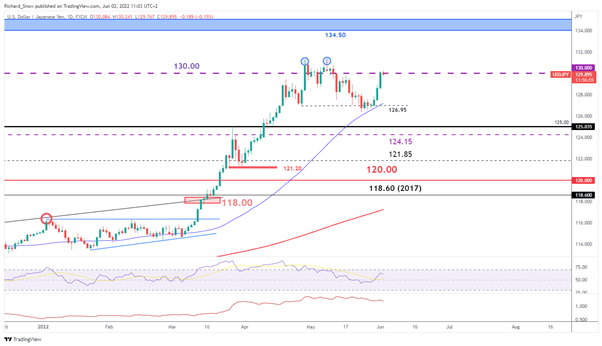 What Is Commercial Property? – Everything You Need to Know

Traders Pile Back into Shorts as USD/JPY Rises Once More 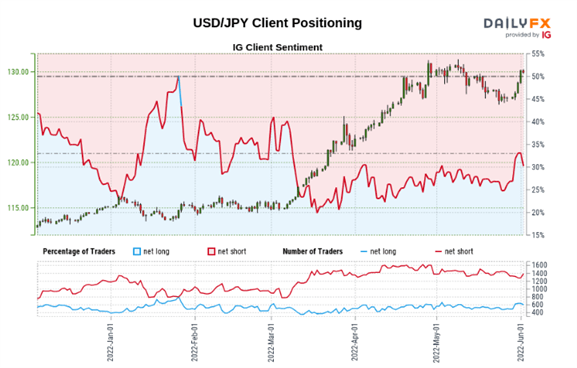 We typically take a contrarian view to crowd sentiment, and the fact traders are net-short suggests USD/JPY prices may continue to rise.

Positioning is more net-short than yesterday but less net-short from last week. The combination of current sentiment and recent changes gives us a further mixed USD/JPY trading bias.