The Bank of Japan will conclude its latest meeting early on Friday. No policy shifts are on the cards, even though inflation has reached its elusive 2% target. This spells more pain for the yen, which has been slaughtered by rising yields abroad and a trade shock stemming from energy prices. On the bright side, the sharp downtrend seems to be entering its final phase.

Pedal to the metal

The Bank of Japan is now the only major central bank in the world that is not even thinking about raising interest rates. That’s because there isn’t much inflation to fight. The yearly CPI rate recently crossed above the BoJ’s 2% target but most of that boils down to soaring energy and food costs.

Supply shocks don’t have a lasting impact on inflation. What the BoJ wants to see is organic price pressures generated domestically, with people enjoying higher wages and spending more on goods and services.

Japan has been trapped in deflation for decades now and the BoJ is trying to use this supply shock to its advantage. If policymakers stay patient and manage to import enough inflation from abroad, that could help break the deflationary mindset that’s been embedded in Japanese society and kickstart the economy. 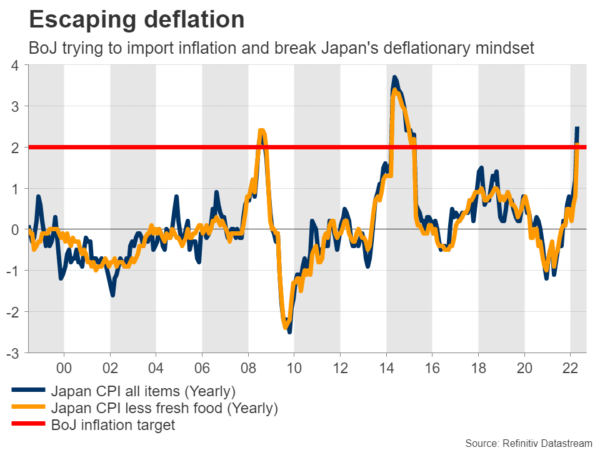 But this process requires the yen to suffer. The BoJ continues to keep a ceiling on Japanese yields, keeping them pegged around 0%. With yields in the rest of the world going through the roof, interest rate differentials have widened, crushing the yen.

A parade of BoJ officials made it very clear lately that no policy changes are on the menu this week. The fact that they felt it was necessary not even to allow market participants to speculate about any potential changes says everything. They won’t lift a finger.

Instead, the spotlight will be on any signals that a move is possible in the next few meetings. A shift seems inevitable later in the year, but it is unlikely that the BoJ will open that door for now. It would defeat the purpose of trying to shock Japanese consumers back into expecting inflation. 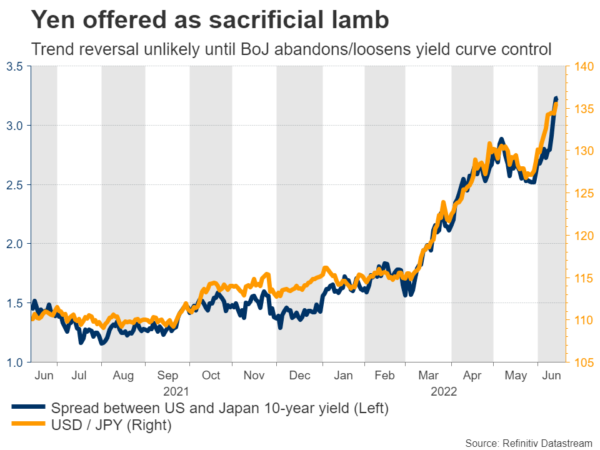 When the BoJ does change tune, the first step would be to either relax its yield curve control strategy by raising the ceiling on Japanese yields, or abandon it altogether. However, this might be a story for September or beyond.

As for the yen, there’s probably some more pain left as the BoJ bides its time, but the sharp downtrend seems to be approaching its bottom.

The yen’s collapse has turned into a political issue in Japan, putting enormous pressure on the government to intervene in the FX market to stop the bleeding. Government officials have resisted so far, aware that FX intervention would contradict the BoJ’s efforts to revive inflation. But with inflation already running above 2% and rising, patience is running out.

BoJ Governor Kuroda probably has a few more months to attempt his inflation experiment. If foreign yields or energy prices keep rising in the meantime, the yen could surrender more ground. In this scenario, dollar/yen could pierce above the recent two-decade high of 135.50 and aim for the 140.0 psychological region.

Now on the flipside, any signs that the BoJ is ready to loosen yield curve control or raise interest rates would probably mark a trend reversal. In this case, dollar/yen could fall back below 131.0 and aim for the 126.0 zone.

Keep a close eye on inflation. If it breaches 3% or higher heading into September, it would be a solid signal that the BoJ is about to turn the ship around.