On Monday and Tuesday this week delegates from EU member nations will meet in Brussels to discuss the 6th round of sanctions on Russia, which is being held up by the issue of banning Russian oil imports via pipeline to the landlocked Hungary, Slovakia and the Czech Republic.

According to text seen by Reuters, seaborne oil sanctions are set to go ahead with exemptions for pipeline delivery to Hungary, Slovakia and the Czech Republic. Leaders aren’t ready to finalize the terms of the temporary exception on Monday afternoon and it is not clear when this will be. Estonia’s Prime Minister Kaja Kallas was quoted as saying, “We’ll try to reach an agreement by the summit in June, this is a realistic approach for now.” The next summit is scheduled for June 23 -24.

Oil prices have been sent even higher as a result of massive refining margins for diesel and gasoline in the US and Europe. Driven by the cutoff in Russian oil supply, refining margins – also known as ‘cracks’ – have soared in Nigeria, the US and Northwest Europe, elevating fuel prices at the pumps.

Brent crude oil prices have attempted to breach a rather elusive level of 114 three times in recent weeks and has finally prevailed on the fourth time of asking. Prices now test the underside of the zone of resistance (115.50 – 118.50). A softer dollar and the reopening of Shanghai after a month of lockdowns has crude prices alongside increased crack spreads. However, recession concerns in the US have grown in recent weeks after US real GDP contracted in the first quarter and large US retailers (Walmart and Target) have warned about a drop off in consumer demand.

Support naturally occurs at the 114 level followed by the psychological 110 level. 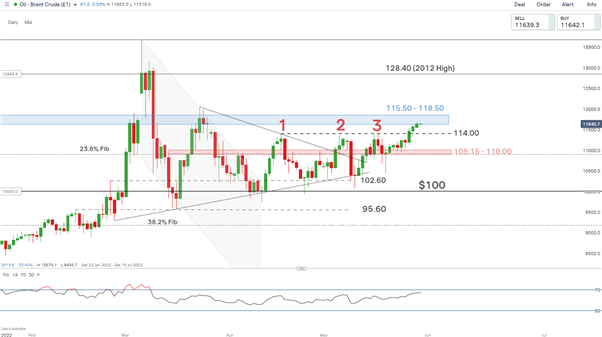 The above-mentioned zone of 115.50 to 118.50 is historically important as it halted gains multiple times throughout 2011 -2014. There were instances where price action broke above, however these were rather short-lived when viewed on the longer time frame. 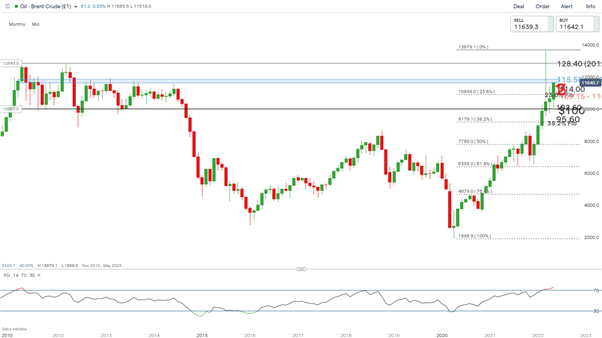 OPEC+ Set to Meet on Thursday

OPEC+ officials have insisted that the oil market remains balanced, with no signs of any shortage of crude, despite lower than anticipated Russian output amid strong global demand. The group has instead apportioned blame to the lack of refinery capacity as the main reason for steep gasoline and diesel prices, along with geopolitics.

Why Retail Brokers Are Flocking to the UAE?