Who’s up for an Aussie special today?

I’m servin’ up these trend and retracement plays on the 4-hour charts of AUD/CHF and GBP/AUD. 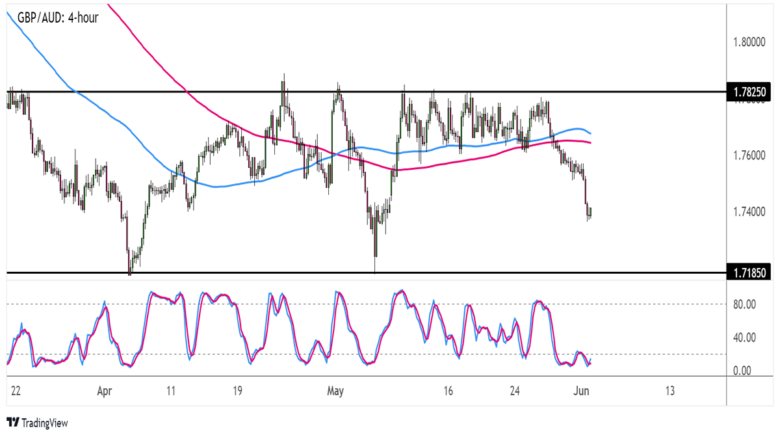 First up is a neat range setup on the 4-hour chart of GBP/AUD.

As you can see from the chart above, the pair was rejected on its attempt to break above the resistance at the 1.7825 mark. Sellers have taken over and are now setting their sights on the lows at 1.7185.

Technical indicators are suggesting that buyers are just waiting for an opportunity to jump back in the game.

Stochastic is already indicating oversold conditions or exhaustion among sellers, so turning higher would mean that a bounce might follow.

The 100 SMA is above the 200 SMA to confirm the presence of bullish pressure, but it’s also worth noting that GBP/AUD is trading below both indicators.

The Week Ahead – ECB’s Tightening Signals Lift for Euro

In that case, better hold out for an actual test of the range support or for Stochastic to start heading north if you’re planning to jump in a long position. 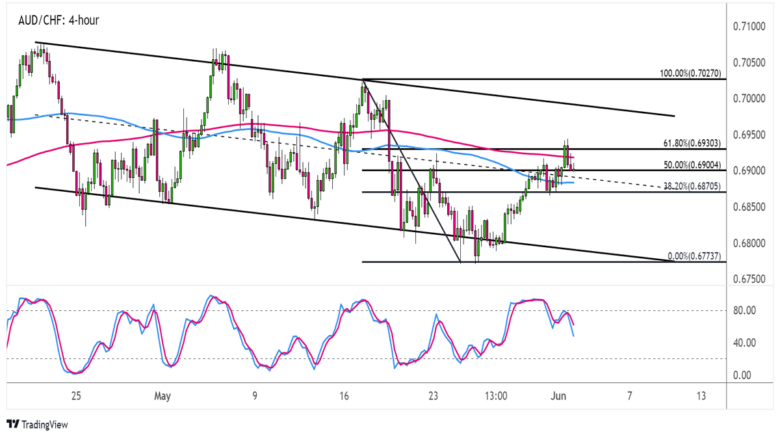 Here’s one for trend followers out there!

AUD/CHF has been moving steadily south inside a descending channel on its 4-hour chart, and it looks like another test of resistance is in the works.

If the correction keeps going, the pair could make it up to the channel top somewhere between the .6950 and .7000 psychological levels before resuming the slide.

However, sellers might be eager to jump in at this mid-channel area of interest near the 61.8% Fibonacci retracement level. After all, technical indicators are already reflecting a pickup in selling momentum.

Stochastic has begun its descent from the overbought zone, which means that Aussie bears are on the move and could take AUD/CHF back down to the swing low from here.

The 100 SMA is below the 200 SMA to confirm that the path of least resistance is to the downside, too. The 200 SMA dynamic resistance is right smack in line with the 61.8% Fib, adding to its strength as a ceiling.

James Dines, the ‘Original Goldbug,’ Remembered by His Peers :: InvestMacro