Brent crude oil just dropped back to a key area of interest!

Unless you were too busy speculating on Johnny Depp’s future movies, you should know Financial Times (FT) recently cited industry and diplomatic sources saying that Saudi Arabia is prepared to raise its oil production should Russia’s oil output fall dramatically as a result of its war on Ukraine.

The report came after the EU struck a deal with the U.K. to ban insurance on ships carrying Russian oil.

Unless they find other insurance providers, ships carrying Russian oil would be turned away from global ports and excluded from a large part of the maritime export market. Yipes! 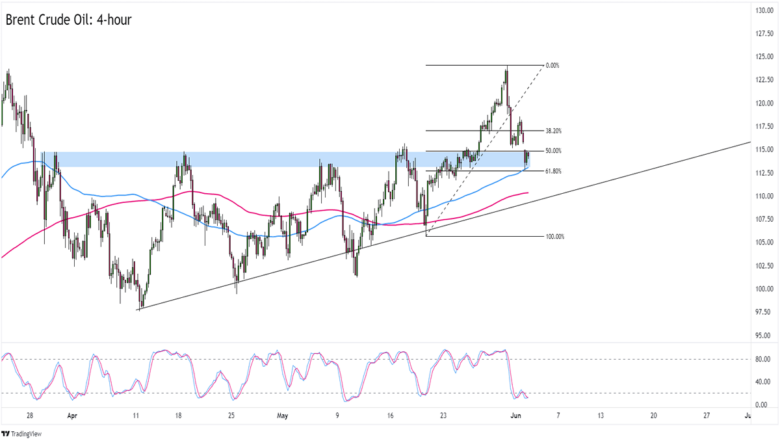 If the cost of Russia’s sanctions eventually leads to less Russian oil production, then the crude oil market could tighten further.

FT shared that while Saudi Arabia believes that “there are not yet genuine shortages,” it’s also “not in their interests to lose control of oil prices.”

Talks of Saudi Arabia possibly making up for any decrease in Russian oil production helped drag crude oil prices that were already hit by overall risk aversion in the markets.

As you can see, $113.00 marks a key resistance that held in April and May. Not only that, but it’s also a hair’s breadth away from the 4-hour chart’s 100 SMA and the 61.8% Fibonacci retracement of last week’s upswing.

How low can oil go?

OPEC and non-OPEC oil producers are meeting today and, word around is that they might stick to their output increase schedule BUT exempt Russia from the deal.

A Russian exemption would put cracks on the group’s deal and pave the way for other members to lobby for production increases. Increased supply from other countries would then allow the U.S. and its allies to impose heavier sanctions on Russia without worrying much about its impact on oil prices.

The possibility of increased global oil supply could weigh on Brent crude oil further and drag it closer to the $110.00 trend line and 200 SMA support.

If OPEC+ members decide to stick to the output plan, however, or if they contradict FT’s claims, then Brent crude oil could bounce from its technical support levels and head for this week’s highs.

This content is strictly for informational purposes only and does not constitute as investment advice. Trading any financial market involves risk. Please read our Risk Disclosure to make sure you understand the risks involved.

Bitcoin losses up to USD1T

Why is Bank of Japan Still Dovish Amid a Cast of Hawks?