Crude oil tried to go lower to start this week after speculation swirled that a US-Iran deal could finally emerge that would add to global supply. This would potentially replace lost Russian production.

He also said that any additional barrels from Iran would be gradual, and that market demand was strong enough to be able to take any extra production that they may add.

An interesting comment was that he didn’t rule out the possibility of adding the US to the cartel at some stage to form a potential OPEC++.

The sentiment re-enforced remarks from Saudi Arabian Energy Minister Prince Abdulaziz bin Salman. He said that OPEC+ would be able to cut production if it was deemed necessary.

He added that the inefficiency of the paper market is not reflecting the fundamentals of the physical market.

Nonetheless, market volatility ticked up a touch while backwardation remains benign, returning to levels seen before the Russian invasion of Ukraine. 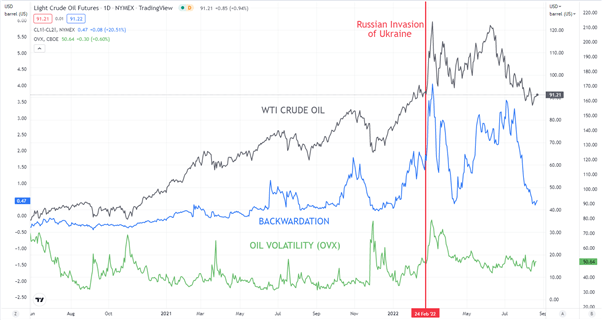 While the energy crisis being exasperated by war and weather, concerns remain over the global economic outlook.

China, the world’s second largest economy, continues to stumble through their zero-tolerance Covid-19 policy and property sector woes. As a result, they are launching stimulatory measures at a time when most other countries are tightening monetary conditions.

A rescue package for property developers of unfinished projects was announced last Friday to the tune of US$ 29 billion (CNY 200 billion).

The situation has been aggravated by a drought that has seen hydro electricity production reduced to the point that the Sichuan province, anindustrial powerhouse, has had to extend power cuts.

Adding to concerns is the upcoming Jackson Hole symposium where the Federal Reserve will be meeting. There is a possibility that the Fed might need to remind markets of their hawkish stance.

These factors could hamper the outlook for global growth.

Bitcoin and Ethereum: No More Pop-ups