The Canadian retail sales report is up for release in a few hours, and I’m seeing this potential breakout on CAD/JPY.

Before moving on, ICYMI, yesterday’s watchlist looked at downtrend correction levels on USD/JPY ahead of the FOMC minutes. Be sure to check out if it’s still a valid play!

And now for the headlines that rocked the markets in the last trading sessions:

FOMC minutes point to likely 0.50% hikes in June and July

FOMC: Inflation risks are skewed to the upside

Use our new Currency Heat Map to quickly see a visual overview of the forex market’s price action! 🔥 🗺️

What to Watch: CAD/JPY 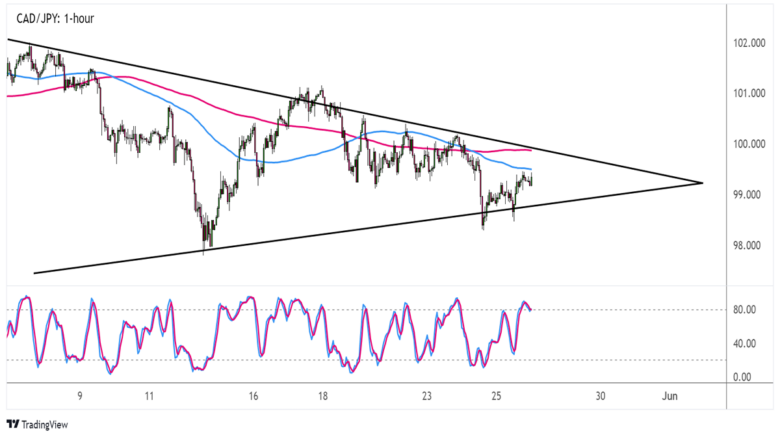 This pair has been forming lower highs and higher lows since the start of the month, creating a symmetrical triangle on its hourly time frame.

Will we see a breakout soon?

It could all boil down to the release of Canada’s retail sales report today!

Analysts are expecting to see stronger consumer spending for April, with the headline figure slated to show a 1.5% gain after the earlier 0.1% uptick. Meanwhile, the core version of the report could advance from 2.1% to 2.2%.

Weaker than expected results could send CAD/JPY below its triangle support and onto a drop that’s at least the same size as the triangle pattern.

On the other hand, an upside surprise could lift the pair towards the resistance around the 100.00 major psychological handle. A break above this could set off a rally that’s roughly 400 pips in height, so watch out!

Just be mindful that technical indicators are pointing to a bearish move, as the 100 SMA is below the 200 SMA while Stochastic is reflecting overbought conditions.

Also, stay on the lookout for any big swings in market sentiment since a surge in risk-off flows could spell downside for the higher-yielding Loonie.