I’m looking at this simple trend retracement play on the hourly chart of NZD/USD.

Will the U.S. PMI readings spur another bounce?

Or will Kiwi traders be eager to place bets ahead of the RBNZ decision?

Before moving on, ICYMI, yesterday’s watchlist checked out a range support breakdown on AUD/NZD. Be sure to check out if it’s still a valid play!

And now for the headlines that rocked the markets in the last trading sessions:

Australian flash manufacturing PMI down from 58.8 to 55.3 in May

French flash services PMI dipped from 58.9 to 58.4 as expected

Use our new Currency Heat Map to quickly see a visual overview of the forex market’s price action! 🔥 🗺️

What to Watch: NZD/USD 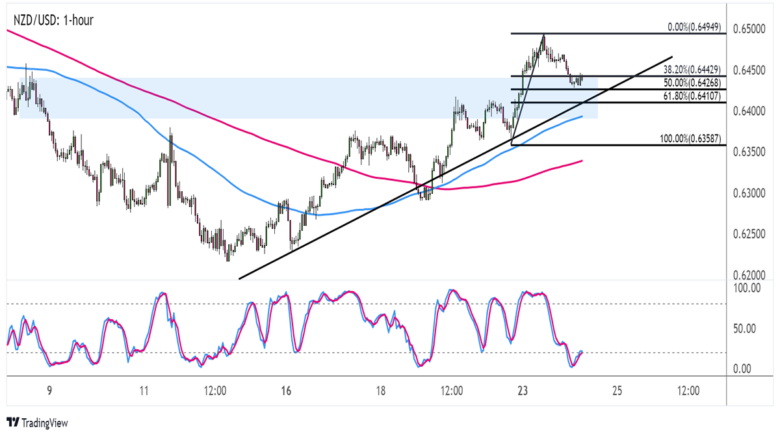 This pair is starting a fresh uptrend, forming higher lows connected by a rising trend line on its hourly time frame.

Will support continue to hold with big catalysts on deck?

Flash manufacturing and services PMIs from Uncle Sam might spur additional volatility, as both sectors are expected to post dips in May.

However, the main mover would likely be the RBNZ monetary policy statement much later on. After all, the central bank is widely expected to hike rates by 0.50% in order to ward off inflationary pressures.

If that’s the case and they signal more tightening moves down the line, NZD/USD might carry on with its climb. Support around the area of interest near the 50% Fib seems to be holding so far, but a larger pullback might still reach the 61.8% level closer to .6400.

The 100 SMA is above the 200 SMA to confirm that the uptrend is more likely to resume than to reverse. In addition, Stochastic is turning higher after reaching the oversold area, indicating that buyers are ready to return.

Better watch out for a move past the swing high around .6500 if bullish momentum is strong enough!

Offbeat Oregon: Treasure of lucky beach-gold prospectors may still be out there

A Nest Might Be Taking Place Into Higher Levels. – Forex Market Analysis –...

Bit Monsters NFT – why do people buy them?