US Dollar (DXY) News and Analysis

US Dollar Index Between a Rock and a Hard Place

The US dollar Index’s (DXY) relentless advance appears to have stalled over recent weeks as recession concerns have emerged. The Q1 GDP contraction and reports of slower consumer demand in the US has raised a few questions about the strength of the US economy for the second half of the year. As a result we have witnessed a large pullback in the dollar index from the yearly high of 104.47 in May, supported by the rate hike trajectory and safe haven appeal as a result of Russia’s invasion of Ukraine.

The pullback bounced off the 50 SMA (blue line) before attempting a sustained bullish continuation which met some heavy resistance ahead of the 103 level (March 2020 high). On the daily chart, yesterday and today (thus far) there has been a rejection of higher prices near that key 103 level, while remaining above the prior low of 102.35 which appears to be halting short-term selling.

Market perception of tomorrow’s ECM meeting (hawkish or dovish) could very well determine near term DXY direction ahead of the FOMC next week. A hawkish ECB may result in a break below the 102.35 support level where the nearest level of support thereafter, comes in at 101.30 – the low of the larger pullback. 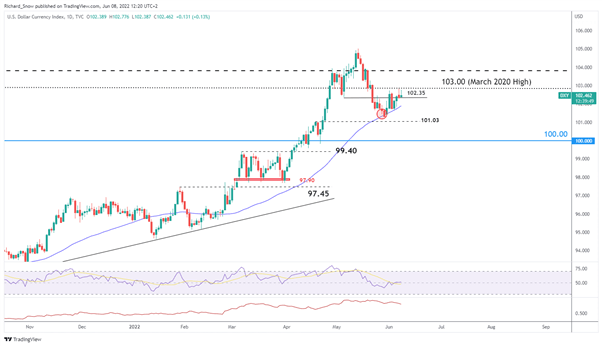 The bar has been set quite high for a longer-term continuation of the bullish DXY run as 104.90 has shown a formidable challenge for previous attempts to trade higher. 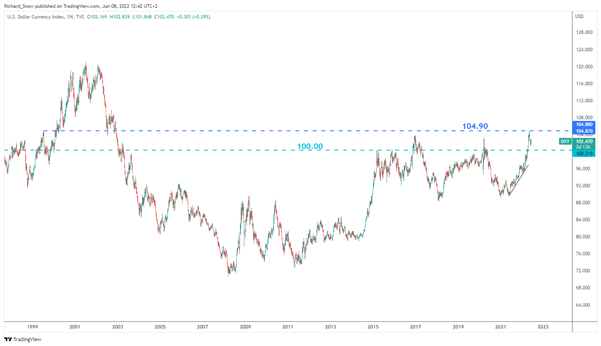 Despite early recession warnings, markets still expect the Fed to raise interest rates by another 200 basis points to the end of the year. Such elevated expectations run the risk of a bearish repricing if incoming economic data disappoints from now until year end. If such a scenario were to play out, the longer-term bullish outlook may become susceptible.

Today we received better than expected GDP data out of the euro zone (Euro has the largest weighting in the dollar index) which has had a limited effect on the EUR/USD pair and the index as markets adopt a wait and see approach ahead of tomorrow’s ECB rate decision. Friday we see inflation data out of the US which is unlikely to have a significant impact on DXY even if inflation prints lower or in line with expectations as Jerome Powell mentioned the Fed is not looking for nuanced inflation data as a reason to slow the current trajectory of rate hikes.

Into next week we have ZEW sentiment and US PPI data before the all important FOMC meeting and retail sales data. Markets and a number of FOMC members favor a 50 bps hike for June and July but retail sales will watched fairly closely after Walmart and Target issued warnings around the strength of the consumer in their respective Q1 earnings reports. In addition, both stores have mentioned growing inventory supplies as concern for future profitability as consumers tighten their belts amid rising inflation. 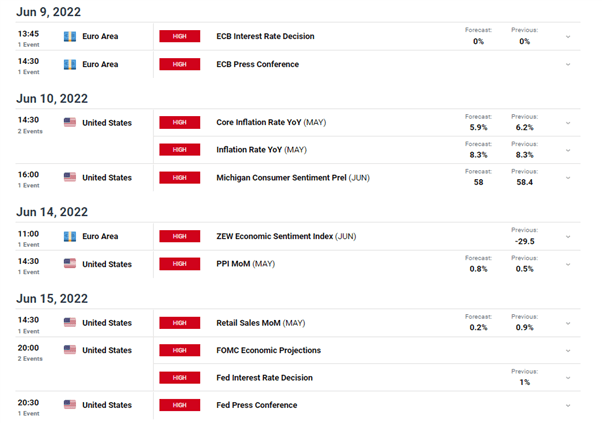 US Dollar Index Outlook: Dollar is Set for Further Advance