After a slow start to the week with Labor Day in the USA on Monday, Asian and European stock markets generally made limited gains on Tuesday. Gold opened strongly but retraced the early morning’s increase. This preview of weekly data considers AUDUSD and EURCAD ahead of the ECB’s anticipated meeting on Thursday and balance of trade from various countries.

On the monetary policy front, activity has picked up this week with the Reserve Bank of Australia calling for a double hike to 2.35% on Tuesday morning as expected and explaining its goals as being both reducing inflation to 2-3% and keeping the economy reasonably strong. The Bank of Canada and the European Central Bank are due to meet on Wednesday and Thursday respectively. The BoC seems very likely to call for a triple hike to 3.25% while the outcome is less certain for the ECB with analysts fairly evenly split between expecting a double and a triple hike.

The focus of regular data this week is on balance of trade from China, Canada, the USA, Australia and France. Traders are also looking ahead to Australian GDP, Chinese inflation and Canadian job data. This is a fairly important week on the economic calendar for scheduled releases, but these are likely to be overshadowed by central banks in the next few days and especially next week’s critical figures on American inflation followed by the Fed’s meeting on 21 September. 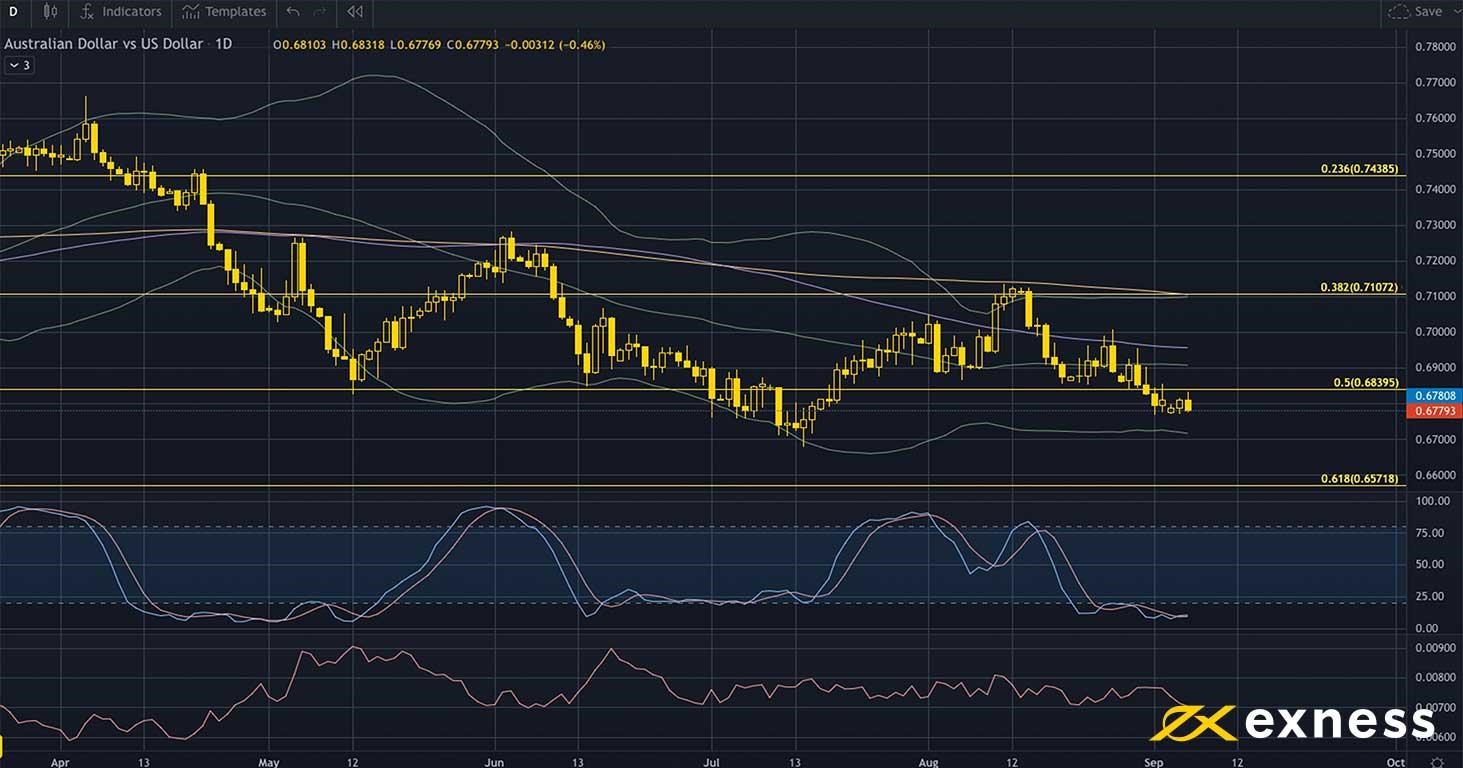 The Aussie dollar has declined against its American counterpart in the aftermath of the RBA’s meeting based on what appears to be a typical presentation of ‘sell the fact’. Participants had almost universally expected the RBA to hike to 2.35% and the subsequent commentary from Philip Lowe was generally perceived negatively, with intention to raise rates but no clear signal on for how long or by how much. These remarks seem to raise the importance of Australian GDP early on Wednesday morning and perhaps especially balance of trade on Thursday.

The likelihood of a triple hike by the Fed on 21 September is 70% at the time of writing. That would take the funds rate to 3-3.25%, close to the moderately restrictive c.3.5% that had been predicted last month for the end of the year. There aren’t any really critical releases from the USA this week; while balance of trade will probably affect the dollar to some degree, traders are waiting for annual inflation on 13 September.

On the chart, the 50% weekly Fibonacci retracement is still the main technical reference with there being clear demand below that area. 67c seems to be a firm support for now and will probably remain so unless there’s a significant surprise from American inflation or the Fed’s meeting. To the upside, the 50 SMA from Bands might cap short-term gains this week. On the whole, with the slow stochastic in oversold and price close to support, the upside seems to be more favourable based on TA although this week’s data might disrupt this impression. 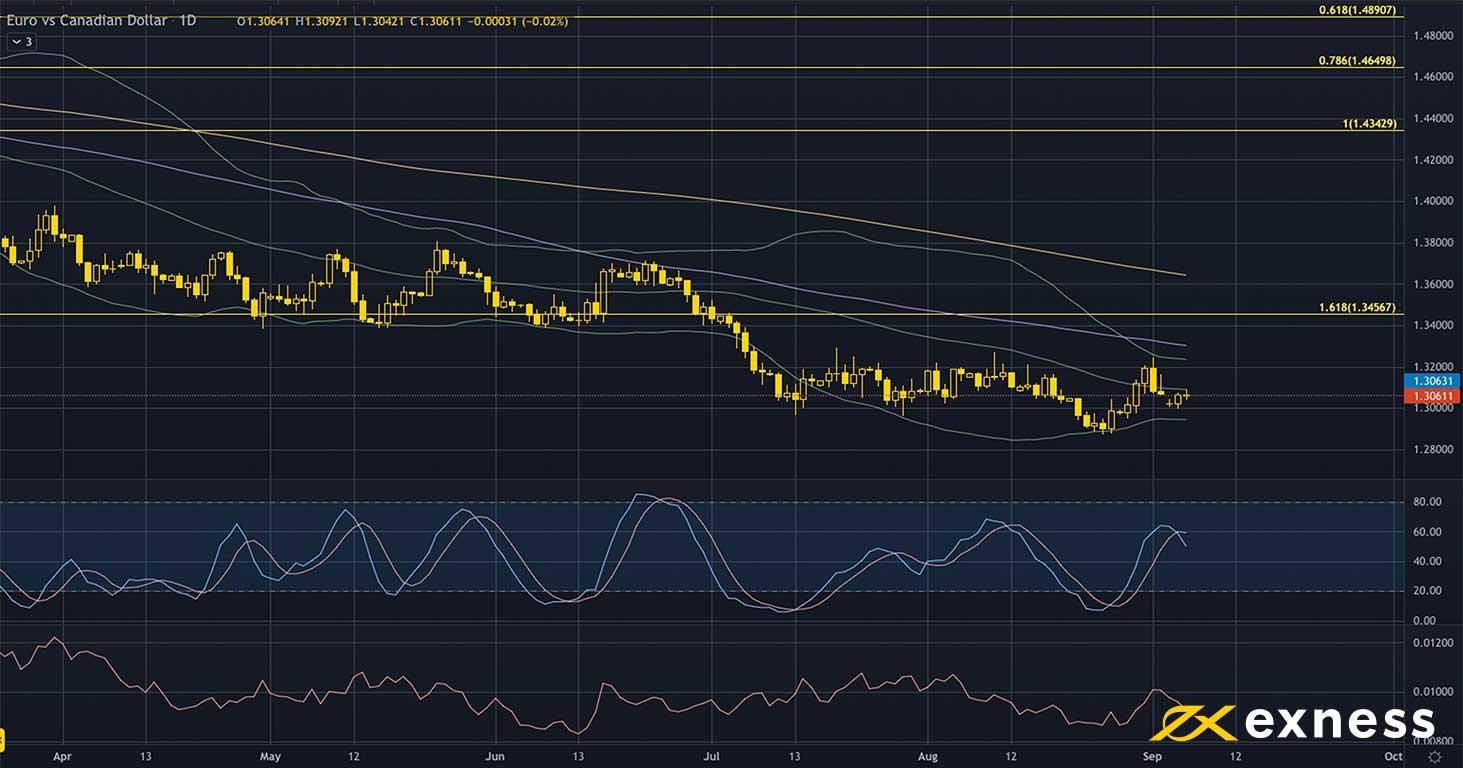 The euro has continued to perform poorly against most currencies in September so far, moving briefly below 99 US cents for the first time in almost two decades. Participants are balancing the higher likelihood of a triple hike by the ECB this week with the worsening energy crisis after Russia’s halting of gas through Nord Stream, very high inflation and a possible recession within the next few quarters. However, the latter two factors are also concerning for the Canadian dollar, while American light oil with which the loonie has a correlation has remained consistently below $90 a barrel so far this month.

$1:30 is an important support which hasn’t been broken conclusively, so a push below this would probably require bad news or at least a negative reaction to the ECB’s meeting on Thursday. On the other hand, the 50 SMA from Bands has caught up to the price and was tested to the upside at the very end of August. The 161.8% weekly Fibonacci extension looks like a fairly strong resistance which might cap a bounce and, depending on sentiment over the next few weeks, possibly provide a decent entry for new sellers.

GBP/USD Price Aiming at 1.18 as Bears Dominate amid Strong USD

Weekly Economic & Financial Commentary: This Party Is Breaking Up Fast