The euro opened stronger on Monday despite rising tensions between Russia and Ukraine after the Asian session fed off the risk on mood post-Chinese PMI. Although the economy remains in a contractionary state, both composite and services improved on the previous print.

Euro traders will be focused on the ECB’s rate announcement later this week with GDP numbers serving as a precursor to eurozone strength. Money markets are pricing in roughly 133bps for 2022 with the upcoming rate decision expected to be left on hold. The question around rising inflation will likely be brought up in the press conference should rates remain the same with talk around a possible 50bps hike in July. Even if there is a hawkish surprise, the effect on the euro may be minimal with current 133bps priced in. Anything remotely dovish on the other hand should lead to much more significant moves to the downside.

From the dollar perspective, the spotlight will shift to U.S. CPI to close off the week. Another undershoot will reinforce the narrative that the economy has reached its inflationary peak and add to dovish pressure. 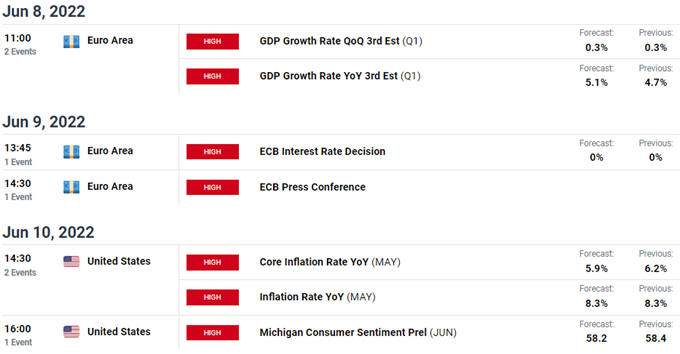 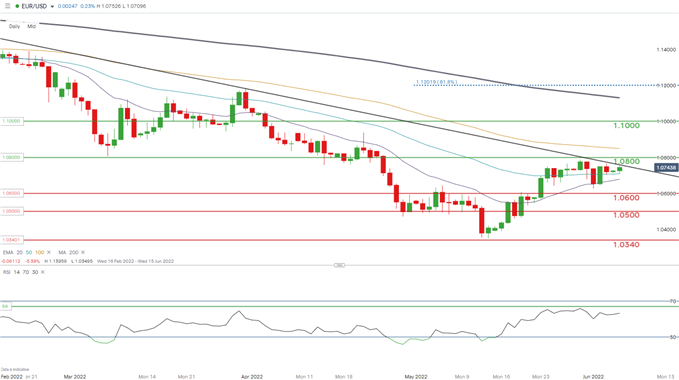 EUR/USD price action has bulls testing the downward sloping trendline (black) towards the psychological 1.0800 resistance zone. We could see a push lower leading up to the key eurozone economic data announcements later this week while the dollar looks to capitalize off the overextended euro positioning.

IGCS shows retail traders are currently LONG on EUR/USD, with 59% of traders currently holding long positions (as of this writing). At DailyFX we typically take a contrarian view to crowd sentiment however, recent changes in long and short positioning result in a mixed disposition.

EURUSD Dips Below 1.05 as Recession Looms!

How to Set a Stop Loss and Take Profit on MetaTrader 5 (iOS, Android,...