Receive timely and compelling market commentary from the DailyFX team

The Euro has gained on the back of the US Dollar slipping through the Asian session as markets take on board an ECB hike and Federal Chair Jerome Powell’s comments overnight.

The 75 basis point (bp) rate rise by the ECB was widely anticipated. In the post meeting press conference, President Christine Lagarde provided language that led markets to believe that the door is open to another jumbo hike of 75 bp.

Speaking at the same time, Federal Reserve Chair Jerome Powell re-affirmed his commitment to fighting inflation. His rhetoric also pointed toward the possibility of another outsized hike by the Fed at their next meeting.

The recent rise in USD/JPY toward 145 has ushered in an era of jawboning from Japanese officials. Finance Minister Shunichi Suzuki and Bank of Japan Governor Haruhiko Kuroda are leading the charge with comments expressing ‘concern about the rapid and one-sided move’.

USD/JPY has moved back below 143 on a day that the ‘big dollar’ has retreated across the board. The Australian Dollar has seen notable gains despite comments yesterday from the RBA hinting toward a deceleration in rate rises going forward.

Treasury yields have eased a few basis points from 2-years and beyond in Asian trade.

Oil and gold have found firmer footing in this environment. The WTI futures contract is approaching US$ 84 bbl while the Brent contract is nudging toward US$ 90 bbl. Gold is back above US$ 1,720.

Chinese inflation data divulged a decrease in price pressures with August year-on-year CPI at 2.5% instead of 2.8% expected and PPI way below forecasts of 3.2%, coming in at 2.3%. Exasperated by another strong fix of the onshore Yuan by the PBOC, USD/CNY is lower today, back below 6.9400.

APAC equities have followed on from a positive Wall Street lead with all markets in the green. Futures are indicating a positive start the European and North American cash sessions.

The full economic calendar can be viewed here.

How to Trade EUR/USD

EUR/USD is bumping up against a few possible resistance levels today. 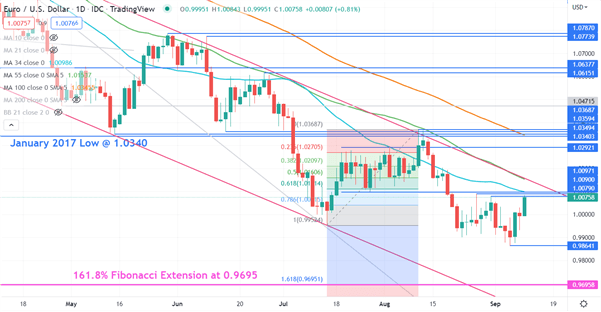