With Fed officials heading to Jackson Hole, market participants are bracing for turbulence. Despite raising rates with incredible force, US yields remain stubbornly low as markets speculate about rate cuts next year. That’s counterproductive for a central bank still fighting inflation, and if Chair Powell attempts to ‘right the ship’ in his speech on Friday, that could extend the retreat in stock markets but supercharge the dollar.

Once per year, Fed officials gather at their summer retreat in Jackson Hole, Wyoming for a symposium to discuss monetary policy. This platform has been used in the past to signal significant strategy shifts, so traders view it as an unofficial Fed meeting. The message this year could be a little sobering.

In a nutshell, markets aren’t behaving like the Fed needs them to. Yields on government bonds are simply not high enough to truly slow the economy and fight rampant inflation. As such, inflation expectations have started to creep higher again. 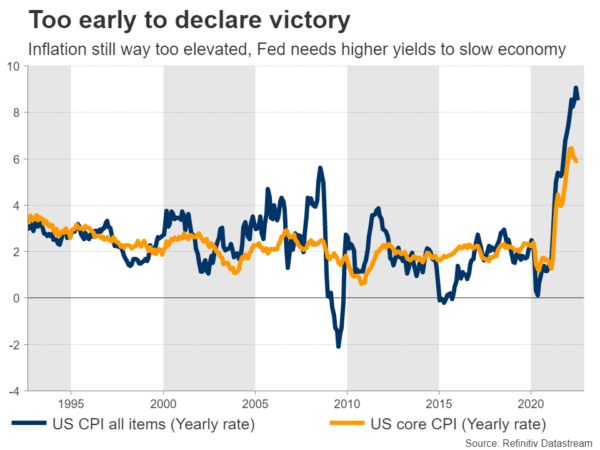 Bond traders are essentially saying the Fed can raise rates all it wants this year, but it will still be cutting them next year to deal with some crisis. This assumption is making the Fed’s job harder. Policymakers might need to raise interest rates even higher to compensate, putting unnecessary pressure on an economy that’s already losing steam according to business surveys.

The desired outcome for the Fed would be to raise longer-dated yields without causing panic in the markets. One way to accomplish that would be to push back against speculation for rate cuts next year, stressing that rates will need to remain elevated for a prolonged period to bring down inflation, even if the economy stalls. 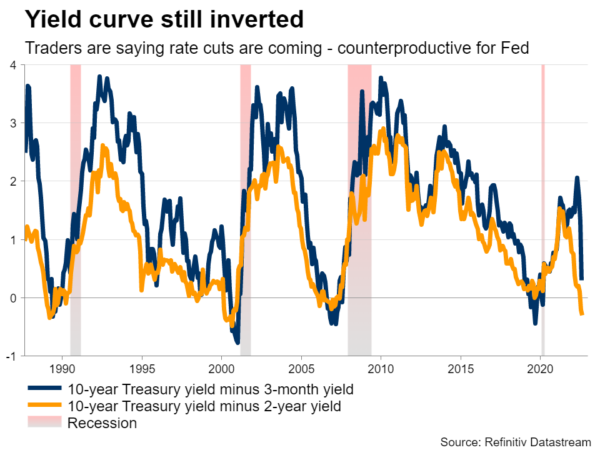 In either case, the dollar would likely benefit. If so, euro/dollar could encounter initial support around 0.9860, a region defined by the lows of December 2002. 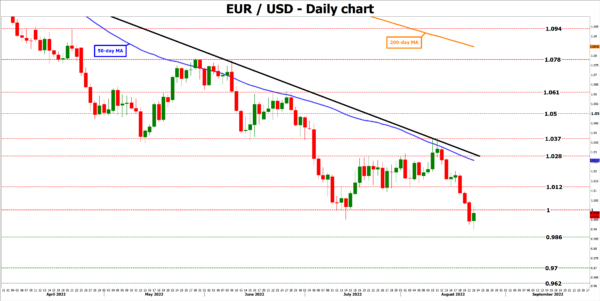 Of course the dollar has already come a long way and if Powell isn’t quite so forceful, that might spark a retracement, sending euro/dollar back above parity for a test of 1.0120. That said, any relief rally that stays limited below the trendline drawn from the February highs would keep the pair in a clear downtrend.

In the big picture, it’s still difficult to call for any trend reversal in the US dollar while the outlook for the rest of the world remains even gloomier. A spiraling energy crisis in Europe has kneecapped heavy industry and consumers, almost ensuring a brutal recession that the European Central Bank cannot deal with because of its inflationary implications.

In Japan, the central bank refuses to even consider tighter policy, keeping the yen under heavy pressure as other nations raise interest rates. Meanwhile, the British pound is trading in lockstep with unsteady stock markets, and the implosion in China’s property sector has ravaged commodity-linked currencies like the Australian dollar. 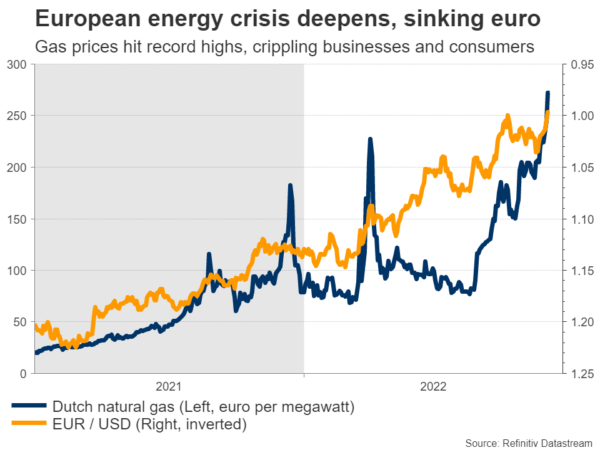 Therefore, there are no alternatives. And the darker the global outlook becomes, the more safe-haven flows the dollar can attract as traders seek shelter from the storm, even if the US economy is also losing power.

The only catalyst that could truly change this story is a ceasefire in the Ukraine war, which has been raging for six months now. Unfortunately, that doesn’t seem imminent.

The Week Ahead – Global super-sized hikes give dollar breathing room

Will the SNB Rock the Swissie with a Huge 100 bps Rate Hike?

Forex Watchlist: Is USD/JPY Ready For A Reversal?