The Federal Reserve is almost certain to raise interest rates for a fourth time on Wednesday when it announces its decision at 18:00 GMT. A 75 basis-point hike is the likely scenario, but several investors are bracing for a possible bigger 100-bps increase, having been wrongfooted by central banks one too many times lately. Even if the Fed steers clear of surprises this time, Chair Jerome Powell’s press briefing 30 minutes later will be scanned for hints as to what to expect in September. In the meantime, the US dollar is trading a little on the soft side, though showing no sign yet it is ready to hand over its crown as FX king.

Rate hike speculation has been in overdrive since June as traders are one minute ratcheting up expectations about how high the Fed funds rate will reach to scaling back their bets the next. But after constant readjustments over the past few weeks and still plenty of uncertainties surrounding the economic outlook, investors are growing more certain about where they perceive rates at year-end, as interest rate futures for December appear to be settling just below 3.5%. 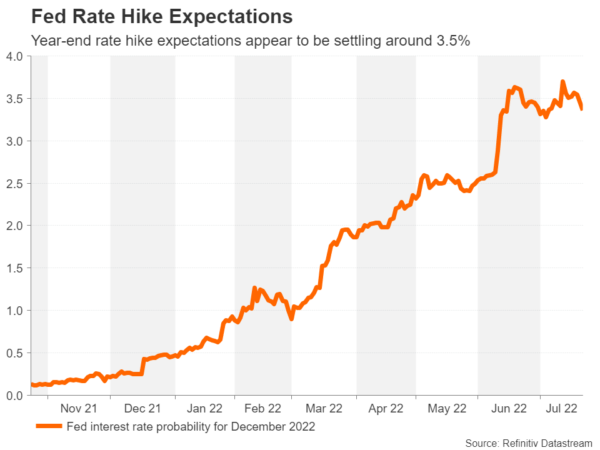 More importantly, markets increasingly see rates peaking in December versus in spring 2023 not that long ago. The forecasts of an earlier peak are partly due to the Fed frontloading its rate hikes more aggressively than anticipated and partly on the back of signs that inflation may finally be topping out. Both market- and consumer-based inflation expectations have receded substantially from recent highs, mirroring the pullback in commodity prices.

Although it’s too soon to assume that this trend will continue, or at the very least not reverse, when also factoring in the slower gear that the US economy is shifting into, markets are optimistic the Fed will be in a position to pause after December and begin cutting rates by the middle of 2023.

Will the Fed discuss a 100-bps rate increase?

Under this purview, the size of the rate hike in July and the next meeting in September might be considered inconsequential. However, with the Fed and other central banks being more data dependent than ever and no longer committing themselves to a precise forward guidance, investors will want to read as much as they can from the statement and Powell’s remarks, particularly as there will be no new dot plot chart this meeting.

While a 100-bps increase cannot be ruled out in July, and markets have assigned about a 10% probability of this, two of the Fed’s most hawkish policymakers played down the need to go for a bigger hike. Nonetheless, the option of a full percentage point increase might still be discussed at the meeting, something that may startle investors, especially following the latest PMI data. 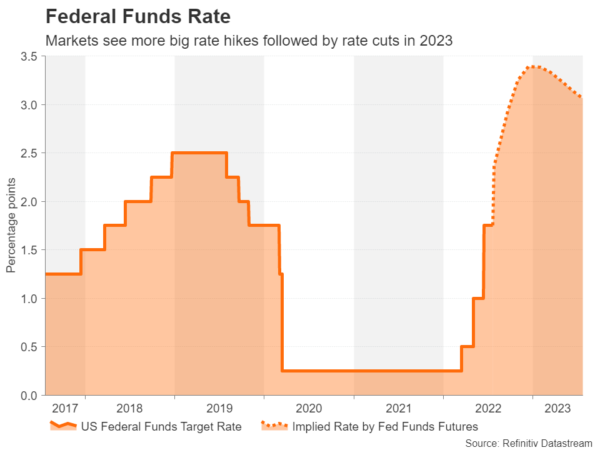 The services sector shrank in July for the first time in two years according to S&P Global’s flash PMI estimates, although, there was a silver lining in that price growth also appeared to be moderating. There will be a raft of other data this week that may well heighten fears of a sharp slowdown, or even a recession, the highlight of which will be Thursday’s GDP numbers.

After the surprise contraction in the first quarter, GDP is projected to have expanded by a paltry 0.4% annualized rate in the three months to June. The puny growth means that it won’t take a big downside surprise to turn the figure negative, hence, it’s possible that the US economy may already be in a technical recession. 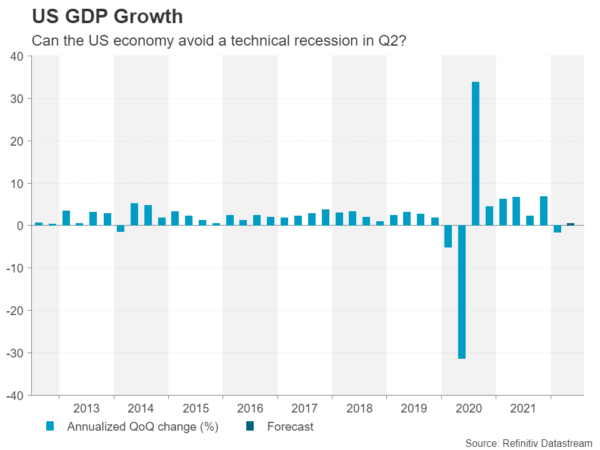 Just as significant will be Friday’s PCE inflation and consumption figures for June. Personal consumption is expected to have jumped by a solid 0.9% m/m in June, while the alternative measure of inflation – the core PCE price index, which is preferred by the Fed, is forecast to have held steady at 4.7%.

Powell’s comments could shore up the dollar

In all probability, Powell will dismiss any weaknesses in the data as temporary and indicate he wants to see stronger evidence that inflationary pressures have started to abate substantially before considering toning down his very hawkish rhetoric. That’s why it may be too soon for investors to expect any hints of a policy shift from the Fed or Powell in July.

If that turns out to be the case, the dollar may seek a rerun towards the 140 level against the yen. Its last attempt was blocked at 139.40 by the 261.8% Fibonacci extension of the May downleg. A successful break above 140 would turn the spotlight to the 300% Fibonacci of 141.32.

However, if Powell does acknowledge rising downside risks to growth and even suggests that he sees inflation declining in the not too distant future, the dollar could pull back more meaningfully. The 135-yen level is likely to be the first port of call in a sharp selloff and should it fail to hold, the 50-day moving average, currently at 133.70 yen, could be targeted next.

From rate hikes to rate cuts

It’s debatable, though, how long and deep any pullback in the greenback would be from investors lowering their expectations of the Fed’s terminal rate. This is because recession risks are growing for all the major economies, so the United States is not an isolated case. In addition, as long as there is a heightened sense of uncertainty, the dollar will draw support from safe-haven demand. The more important question for the markets and bigger threat to the dollar will come later in the year when the attention switches to who will be the first to cut rates.

Bitcoin – Up or Down?

The Week Ahead – Fed might go easy as US economy contracts

The Fundamental and Technical Backdrop Remains Bullish for WTI