Fresh advance was sparked by a profit-taking after sterling hit the lowest in 37 years on Wednesday, but the action was strongly rejected at this zone and is likely to fail to register a weekly close below cracked key support at 1.1410 (2020 low).

Renewed optimism has been fueled by the action from new UK PM Liz Truss, who decided to cap soaring consumer energy bills for two years, to cushion strong negative impact from the energy crisis caused by the war in Ukraine and sanctions on Russia.

The pair is on track for the first weekly gain after three consecutive weeks of losses, with initial positive signal to be boosted by close above 1.1600 zone, though verification of the signal will require extension and break of next key barrier at 1.1738 (Fibo 38.2%, reinforced by falling 20DMA).

Stronger recovery so far looks as a likely scenario, as weekly and monthly studies are oversold and fundamentals started to improve, although larger picture remains firmly bearish and the outlook is negative, suggesting that bounce would just provide better levels to re-enter bearish market. 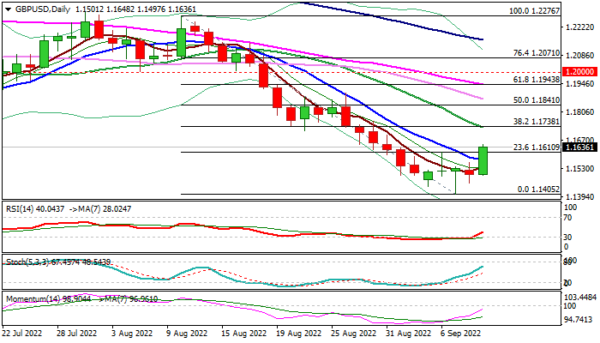 USDCAD is bouncing from 1.2800 support with bullish divergence

Europe’s Inflation Expectations on the Rise