We Do Not Expect Any Major Policy Surprises on June 15

There are not likely to be any surprises in enacted policy changes when the next FOMC meeting wraps up on Wednesday, June 15. An increase of 50 bps in the fed funds rate seems all but assured, which would take the target range to 1.25-1.50%. The minutes from the May meeting underscored the broad support for “expeditiously” getting the Fed’s primary monetary policy tool back to neutral through a “couple” more 50 bps hikes, and more recent comments from Fed officials show no signs of cold feet.

Plans to adjust the FOMC’s other key policy lever—its balance sheet—were adopted at the Committee’s meeting on May 4, leaving no balance sheet changes to be made at this particular meeting. Starting this month, the Federal Reserve will allow up to $30 billion of maturing Treasury securities and $17.5 billion of mortgage-backed securities (MBS) to roll off its balance sheet each month. Those caps are set to be doubled to their terminal size in September.

With the increase to the fed funds rate at the upcoming meeting so well telegraphed, the focus will likely be on what comes next for policy amid a still rapidly evolving and unusually uncertain outlook. Since the FOMC’s last meeting on May 4, overall financial conditions have hovered around the tightest levels in two years (Figure 1). Treasury yields remain elevated, credit spreads are still wide, at least by the standards of earlier this year, and the S&P 500 index narrowly avoided closing in bear market territory a few weeks ago. Although there has been some easing in recent days, the tighter stance of financial conditions in May indicates that the Fed’s hawkish posture is starting to leave its mark. 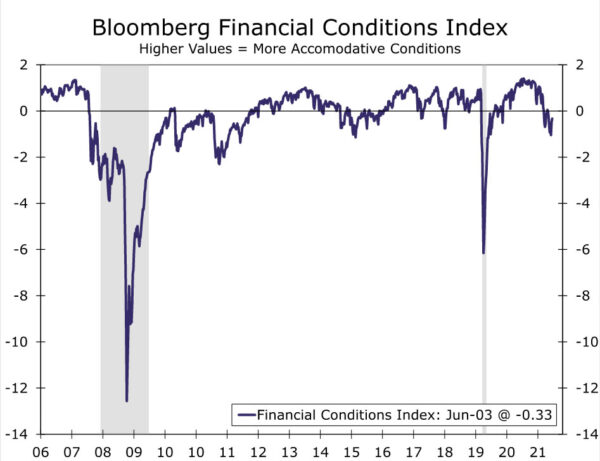 The housing market is the sector in the real economy that has started to feel the tightening in financial conditions the most. Since the FOMC’s definitively hawkish pivot around the start of the year, the benchmark 30-year mortgage rate has shot up roughly 200 bps on balance. The dampening effect on the market has been greater than expected, with the Bloomberg Housing & Real Estate Surprise Index quickly nearing the lowest levels since late 2018 (lower index values indicate weaker-than-expected readings). Mortgage purchase applications have retreated nearly 30% from their January high, existing home sales have tumbled 14%, and price appreciation has shown the first hints of backing off its torrid pace of the past two years (Figure 2). 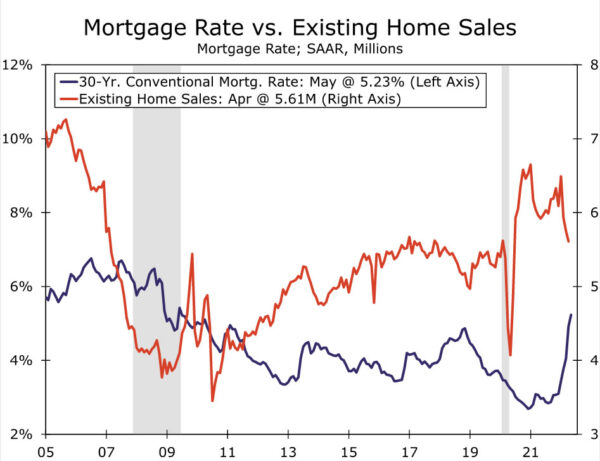 Yet the inflation data and labor market remain red-hot. The year-ago rate of CPI inflation inched down in April but remains up a blistering 8.3%. Core CPI surprised to the upside in April, while the annualized rate of core PCE inflation over the past three months has continued to run at double the Fed’s 2% target (Figure 3). The significant upward pressure on prices does not appear to be going away anytime soon either. Gasoline prices climbed to new highs and natural gas prices surged this past month, while services inflation has yet to peak in our view. All told, a definitive slowdown in inflation likely remains months away. 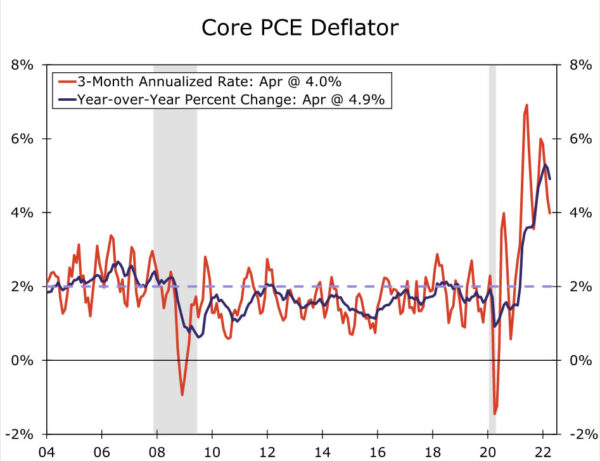 Underpinning the heightened inflation pressures is an extraordinarily strong labor market. Despite job openings slipping in April, there remained nearly two openings for every unemployed worker. Payroll growth surprised to the upside again in May, while at 3.6% the unemployment rate remains at the bottom end of the FOMC’s longer-run estimated range. Average hourly earnings growth has eased from the more frenzied pace of hiring registered late last year, but is rising at a 4.5% clip the past three months—still well above a pace consistent with 2% inflation accounting for productivity gains (Figure 4). 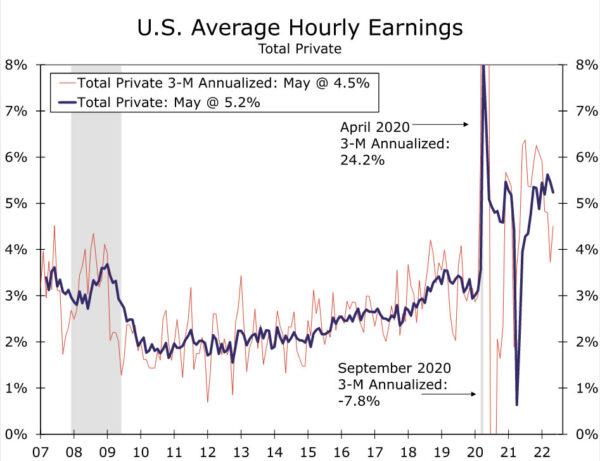 How Much Higher Will the Dot Plot Shift?

Although there should not be much drama associated with the actual policy changes that the FOMC is expected to announce, there could be some market-moving news in the Summary of Economic Projections (SEP). Four times a year (i.e., March, June, September and December) the Committee updates its SEP, which summarizes the macroeconomic forecasts of the FOMC members. When the last SEP was published in March, the median forecast called for a 4.1% year-over-year rate of core PCE inflation in Q4-2022 (Figure 5). But with core PCE inflation currently running close to 5%, we would not be surprised if the median forecast for the end of this year ticked up modestly. 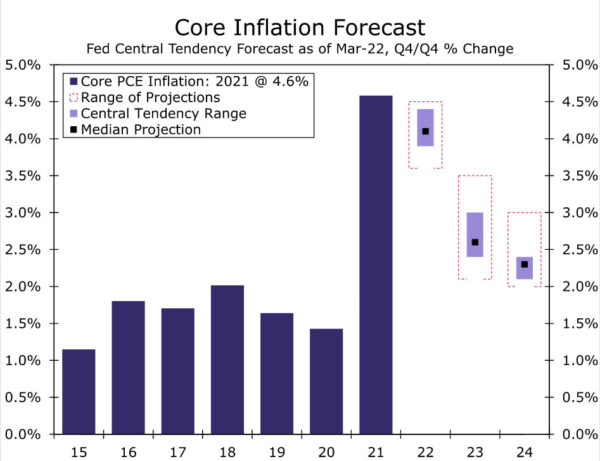 Another likely forecast change, which could potentially be more consequential in terms of market reaction, would be a shift higher in the “dot plot.” The median 2022 dot in the dot plot that was released following the March 16 meeting stood at 1.875%, which is about 100 bps higher than the current fed funds rate (Figure 6). The minutes of the May 4 FOMC meeting indicated that there is strong support for 50 bps rate hikes at the “next couple of meetings.” If the Committee delivers 50 bps rate hikes at both the June 15 and the July 27 policy meetings, then the median dot from the March SEP would be reached at the July meeting. But with many FOMC members publicly suggesting in recent weeks that the Fed may need to tighten throughout most of the year, an upward shift in the 2022 dot seems to be all but assured. 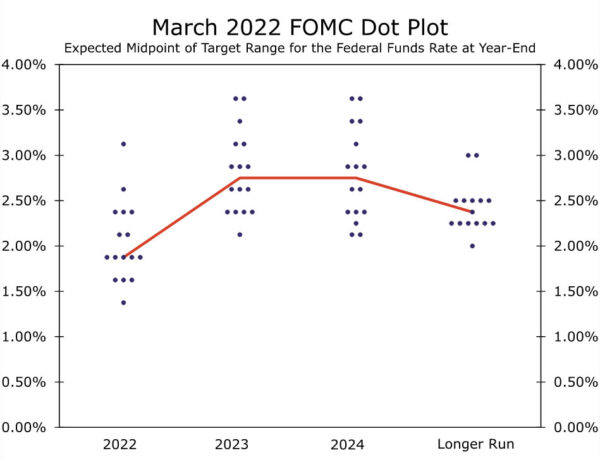 The minutes of the May 4 FOMC meeting also showed that “all participants reaffirmed their strong commitment and determination to take the measures necessary to restore price stability.” Although all Committee members want to restore price stability, they clearly could have different opinions on how much additional monetary tightening will be needed to do so. The dot plot will give each policymaker the opportunity to anonymously express their assessment of the appropriate level for the fed funds rate. Financial markets are currently priced for a fed funds rate between 2.75% and 3.00% at both the end of this year and the end of 2023. Market pricing currently indicates the fed funds rate will top out between 3.00% and 3.25% in spring 2023 before the FOMC begins to modestly ease policy by the end of the year.

If the median dot for the end of this year shifts higher than 2.875% (i.e., the midpoint of a 2.75% to 3.00% target range for the fed funds rate), then the Committee on balance would be more hawkish than most market participants currently judge, which likely would put upward pressure on bond yields. Bond prices also could be adversely affected (i.e., yields could move higher) if the dot plot indicates many FOMC members expect significant additional tightening will occur throughout 2023. We think the year-end 2022 median dot will be 2.875% or so, which would put the fed funds rate modestly above neutral by year-end and in line with our own forecast. The current median dot for 2023 is 2.75%, and we expect this to shift higher to 3.375% or so. This would signal more tightening at the margin while also striking a balance between some of the more hawkish and dovish FOMC participants. For 2024, we expect the median dot to be largely unchanged from March’s 2.75%. Cooling inflation later next year and into 2024 should permit the FOMC to start moving the fed funds rate back towards neutral.

With both inflation and the labor remaining so hot, we do not expect the FOMC will be derailed from its hawkish track by the recent tightening in financial conditions. However, with signs that tighter policy is beginning to steep into the economy, we will be watching closely for what the FOMC will need to see to slow down on its current path of policy tightening, let alone for what it will take for the hiking cycle to eventually come to a conclusion.

Will Powell Again Be “Balanced” in His Press Conference?

As is now standard operating procedure, Chair Powell will hold a press conference after the FOMC’s statement is released at 2:00 PM EDT on June 15. It is important to note that Powell speaks on behalf of the entire Committee, not just for himself exclusively, in the press conference. Therefore, his answers to the questions he is asked provide some insight into areas of consensus among the FOMC members. We would characterize Powell’s tone in his post-meeting press conference on May 4 as “balanced”. That is, the Fed Chair was not overly hawkish nor was he overly dovish.

This balanced tone indicates to us that most FOMC members thought on May 4 that further tightening in coming meetings was warranted. James Bullard, the president of the Federal Reserve Bank of St. Louis and one of the more hawkish members of the Committee, has subsequently said that the FOMC should “front load” rate hikes to get the fed funds rate to 3.50% by the end of the year. However, some members do not necessarily appear to be on board with taking the fed funds rate significantly above “neutral”, which most would define to be in a range of 2.25% to 2.75%, by the end of the year. For example, president of the Philadelphia Federal Reserve Bank Patrick Harker, has said that he expects “50 bps hikes in June and July,” and then a more “measured” pace thereafter. President Raphael Bostic of the Atlanta Fed recently said that a “pause” in the tightening cycle in September “might make sense.” Given the seeming divergence in opinion among different Committee members regarding the appropriate stance of policy later this year, we do not expect Chair Powell to be overly hawkish in his post-meeting press conference on June 15. A balanced approach once again appears to be the most likely outcome in our view.

EUR/USD to press the recent 1.08 low over coming sessions – ING

XETA and DXCHECK tokens are in the spotlight. Why’s that?