The annual inflation rate in New Zealand accelerated to 7.3%, a new high since 1990 and above average forecasts for 7.1%. The quarterly price growth of 1.7% also remains elevated, showing no deceleration in the last quarter.

Short-term inflation figures above expectations have triggered a “classic” strengthening of NZD buying. However, we believe that the market played the kiwi higher, relying on the heightened risk appetite that prevailed in the morning rather than on fundamentals.

The RBNZ still missed its chance to catch up with the pace of Fed policy tightening, as at the July 13 meeting, they raised their rate by 50 points, which is lower than the 75 points by which the Fed raised their rate. It is widely priced in by markets that both central banks will repeat their steps next time. Additionally, the next Fed meeting is in 9 days versus 30 days for the RBNZ, which widens the yields differential even more.

The kiwi is now locally overbought in the dollar, which forms a pullback in risky assets, and traders use fundamental news to take profits from the previous strong move.

As part of the rebound gaining momentum, it is worth paying attention to the dynamics of the pair NZDUSD near 0.7200, the level of the previous local lows. An active rise in the pair above these levels would indicate that we are seeing a broader recovery rather than a local rebound. But that will require a global dollar retreat and a sustained reversal of the markets to the upside. For now, we see a bear market with regular bounces. 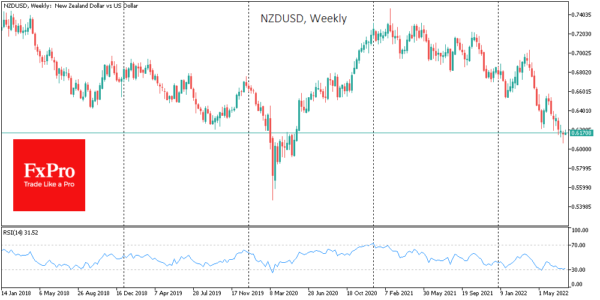 Chart Art: Trend And Range Trades With NZD/USD And GBP/CAD

How to Setup RSI Alerts on TradingView

Should You Trade On Your Own Or With A Team?