NZDUSD resumed its slide on Wednesday, bringing the key 0.6335 – 0.6195 bottom area back under the spotlight after a four-day-long unsuccessful battle with the red Tenkan-sen line.

The RSI and the MACD remain negatively charged within the bearish zone, while the negative intersection between the red Tenkan-sen and blue Kijun-sen lines is another indication that the bears may hold onto control in the coming sessions.

Should the price close below 0.6235, the former resistance zone around 0.6160 may immediately attract some attention before selling pressures intensify towards the 0.6000 round-level. Below that, there is another important barrier around 0.5916.

BoJ to Keep its Foot on the Gas Despite Yen Collapse

Conversely, a decisive move above the red Tenkan-sen line currently at 0.6316 may continue towards the 20-day simple moving average (SMA) at 0.6400. If the 50-day SMA proves an easy obstacle too at 0.6452, the pair may visit the 0.6500 psychological mark, though only a durable rally above June’s topline of 0.6567 would make any rebound credible.

Summarizing, the odds are in favor of the bears in the NZDUSD market, and the next downside target is the May-June floor of 0.6235 – 0.6197. 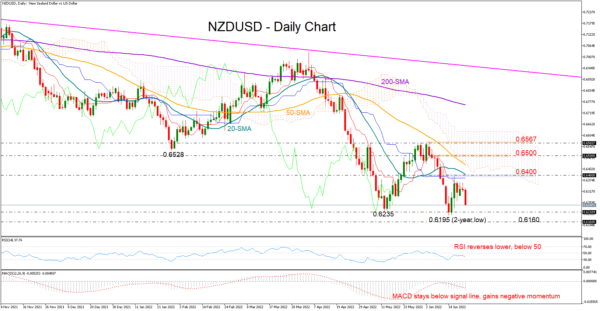