WTI oil lost more than 4.5% on Monday, returning to the area of last month’s lows and marking a new stage of the downtrend.

Oil dynamics are tightly linked to the expected economic growth rate and appear weakly linked to gas prices. The trend in oil has already turned downwards in the first half of June, while gas has been rising strongly for most of July, only beginning to correct in the last few days.

The WTI price slumped sharply by more than 4% on Monday and stayed below its 200-day moving average. Earlier in July, this curve acted as a strong support line several times. 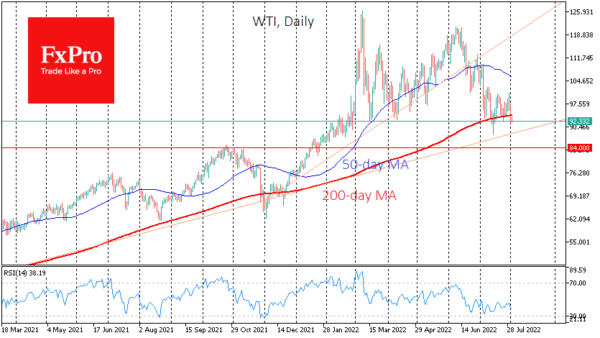 Are Corporates Panicking over Price Crash?

For Brent, it is even more symbolic, as yesterday’s sell-off took it below $100. The British benchmark has managed to stay above its 200-day average, but getting well below the important round level could trigger a sell-off in the weaker hands. That is, from those speculators who have been making bullish bets. 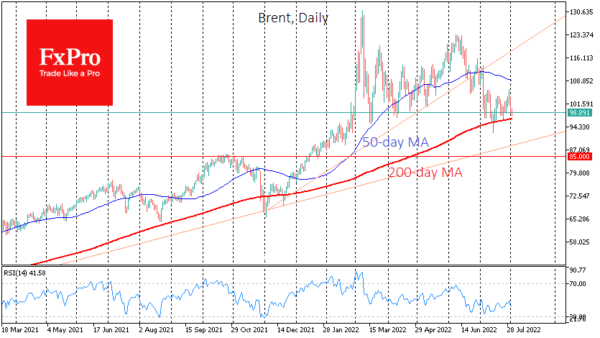 The global economic slowdown, in our view, is a more significant factor influencing the oil price than fears of supply cuts. If we are correct, we might see a local sellers’ victory this time and consolidation below the 200-day average, which we have not seen since November 2020.

This week, US jobs data could be critical in determining the direction of oil in the future. In case of weak economic data, commodity prices may increase their decline. A new upward momentum cannot be ruled out if the following jobs report surprises with its strength. However, the latter scenario looks less likely.

A collapse in WTI crude under the 200-day average would open a direct route to $84, the cyclical highs of last November. For Brent, a further bearish sentiment would open up the potential for a correction to $85-86.

How You Can Use Your Trading Worries To Your Advantage