On Thursday the EU finalized the ban on Russian seaborne oil with ambitions of reducing its oil imports form Russia by 90% by the end of the year, once Germany and Poland reduce their respective purchases. Oil prices rose on anticipation of a deal late on Monday this week but later turned sharply in anticipation of OPECs supply increases to compensate for the lost Russian supply to Europe.

Elevated oil prices are set to contribute to the worsening inflation situation, as the Eurozone reported a 40 year high of 8.1% for May compared to the same period last year. Earlier this morning German PMI data revealed that the post-lockdown growth in the EU’s largest economy has been slowing. Services PMI fell to 55 vs the 56.3 flash estimate and the prior figure of 57.6 for April. The composite figure which combines services and manufacturing fell for a third straight month to 53.7. 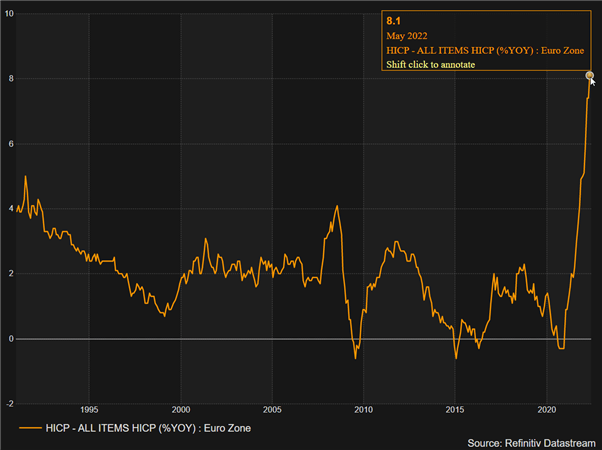 Surging inflation coupled with a more pessimistic economic outlook narrows the window of opportunity to raise rates in the EU. Thus far, members of the ECB governing council have identified July as the appropriate time for the EU’s first rate hike however, record inflation for May could justify a deeper conversation around a hastened end to asset purchases and potentially hiking as soon as next week. The chances of this happening is very slim as ECB President Christine Lagarde has made every effort to telegraph actions of the ECB well ahead of time despite increasing pressure to act sooner rather than later.

Risk Events for EUR/USD Stack up

Today NFP and US PMI data dominate the economic calendar. Much of the EUR/USD rise has been due to a softening of the US dollar and therefore, continued risks of a US recession via data prints could have a meaningful impact on the pair later today and into next week. Lower employment data and declining services (non-manufacturing) PMI could negatively affect USD sentiment after the respective releases despite a very strong labor market and robust US economy. The reason for this is because of the contraction reported in Q1 and negative guidance on the state of the US consumer issued by large retailers Walmart and Target after a disappointing earnings update.

Next week, the main events consist of the ECB rate decision, Michigan consumer sentiment and US inflation data.

The technical outlook for EUR/USD appears to be pulling away from the May lows as the market anticipates multiple rate hikes from the ECB for the rest of the year. In addition, a potentially worsening economic outlook for the US could add to the recent bullish move in the pair but remains data dependent.

EUR/USD is currently testing 1.0758 with the more significant 1.0805 level the next level of resistance. After breaching above 1.0758, the pair reversed someway short of the 1.0805 level therefore, it is a level of interest to assess a bullish continuation.

Support once again, is the 2020 low of 1.0635 as prices pivoted higher from this level at the start of the trading day. 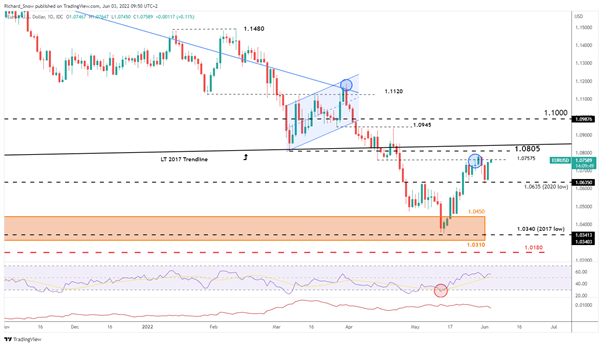 Money markets are currently pricing in just short of 125 basis points by year end, which would leave the base rate well above zero. Interestingly enough, there is a 60% chance of a 10 bp hike next week which appears rather optimistic for the well-telegraphed ECB, looking at July for the first hike.

US Close – A terrible week ends on a positive note, Crude prices rallying...

US Bond Market May Decide Dollar Fortune this Week