The GBPdid not enjoy its most productive week, losing ground against the Euro and US Dollar respectively. As August came to an end GBP posted its worst monthly loss since late 2016 and this continued into early September as the pound briefly slid to as low as 1.14991, a new low since March 2020 when COVID-19 hit markets. GBPUSD declined from a weekly high of 1.1757 to trade sub 1.15, a drop of 280 odd pips remaining on the fence of the key psychological 1.15 level. The losses came on the back of resurgent US Dollar buying as well as an ever-worsening economic outlook.

The prospect of the pound hitting parity with the US Dollar is becoming ever less outlandish. While the UK faces many challenges experienced by other countries this has been compounded by its own unique set of problems. Growth is set to slow further in the coming months, based on the unequivocal message from collapsing leading indicators it won’t be long before the UK is flirting with a recession. According to the British Chambers of Commerce forecasts the UK is already in a recession withinflation to hit 14% later in the year. 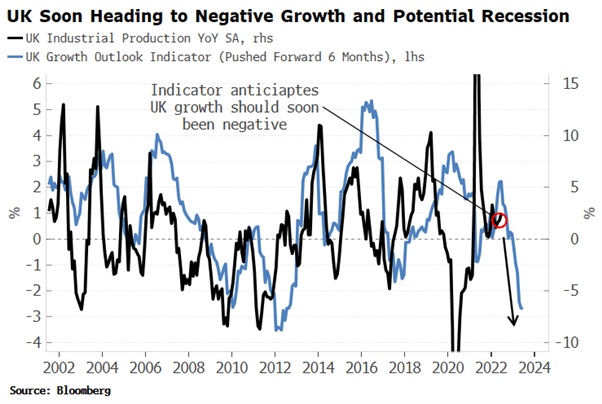 The race for the next Prime Minister of the UK comes to a head on Monday with the announcement expected around 12h30 GMT. The current frontrunner Liz Truss and her allies have made the BoE a political punching bag, dragging Governor Andrew Bailey’s handling of the aftermath of the pandemic into the limelight. Ms. Truss has been making waves in the election race as her plan for the BoE is seen as a threat to the Pound and UK Bonds. Truss’s thoughts on how to manage the Bank of England are adding to a mounting list of threats to the value of the pound and UK government bonds. The main concern stems from Truss’s rhetoric of potentially upending a three-decade-long focus on fighting inflation and telling policymakers to use tools that were discredited in the 1980s. Part of her solution includes a radical shake–up of how Covid debt is treated and a review of the BoE’s mandate. For now, markets aren’t pricing in any major changes for the BoE as GBPUSD weakness has more to do with sentiment around inflation and the strength of the US dollar. Should this come to pass however we could see a selloff in gilts and a selloff in sterling as well, with the prospect of parity to the US Dollar coming into play.

UK Economic Calendar for the Week Ahead

As September kicks off, the UK economic calendar is set to enjoy a subdued week. Over the course of the week, there is only one ‘high’ rated data release, whilst we also have two ‘medium’ rated data releases. The UK Prime Minister’s announcement has been added as a high-rated release as volatility should be expected when the news filters through.

Here are the twohigh ‘rated’ eventsfor the week ahead on the economic calendar:

For all market-moving economic releases and events, see the DailyFX Calendar 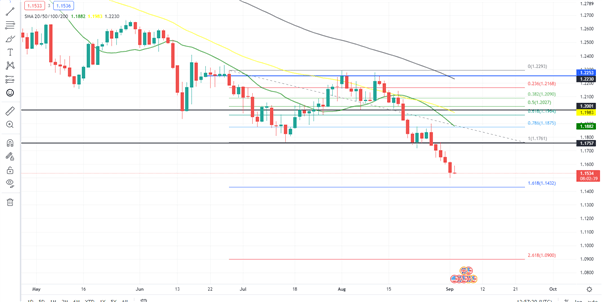 The GBP has been influenced by broader risk appetite this year. The August rate hike came with a dire set of economic forecasts, compounded by the Federal Reserve’s hawkish rhetoric at the Jackson Hole Symposium which pushed the GBPUSD to new yearly lows. The British Pound remains in a precarious position as evidenced by recent data with an increase in CPI projected for the rest of the year as well as rate hike expectations. The rate hike expectations have gone up once more since the Jackson Hole Symposium with markets now pricing in 176bps by year-end which has failed to arrest the slide (usually an increase in rate hike expectations should have strengthened the GBP). There is a strong possibility that any significant moves on the pair will be facilitated by the global tightening cycle as well as the route taken by the new UK Prime Minister as both candidates will take aim at monetary policy.

This week’s 280-odd pip decline in GBPUSD has seen the pair below the psychological 1.1500 Key level while also trading below 20, 50, and 100-SMA. The downward gradient displayed by the SMA’s does not bode well for sterling as we begin the week. We do have the fib extension 1.618 level around the 1.1432 level which I expect to be met soon. Since we have moved down significantly with no sustained pullback, we could see an early week bounce which may provide an opportunity for would-be-sellers to evaluate their positions.

Whether you are a new or experienced trader, we have several resources available to help you; indicator for tracking trader sentiment, quarterly trading forecasts, analytical and educational webinars held daily, trading guides to help you improve trading performance, and one specifically for those who are new to forex.

—– Written by Zain Vawda for DailyFX.com

XTB sees a surge of net profit of 638% LeapRate

USD/CHF: as a defensive asset, the franc seizes the initiative – Analytics & Forecasts...