The Reserve Bank of Australia delivered a hawkish surprise momentarily undervalued by the markets. The RBA raised the rate to 0.85%, immediately 50 points after a 0.25% hike last month and expectations for a repeat this time.

A big hike to curb inflation was backed by fast price growth by strong demand for Australian export. And it was just a repeat of such hikes in other advanced economies, including New Zealand. 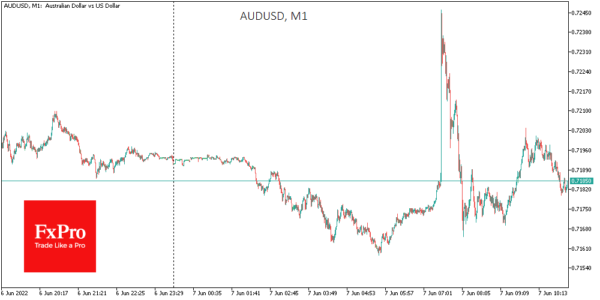 The stronger-than-expected rate hike caused a legitimate initial surge of 0.8% in the first minute. But surprisingly, this move proved unsustainable, and the AUDUSD soon dipped below levels before the decision’s release.

From the chart, it is easy to see the sustained pressure on the Aussie for the third day after touching the 200-day average. This line was also a significant obstacle in early May, immediately after the reaction to the first policy tightening. 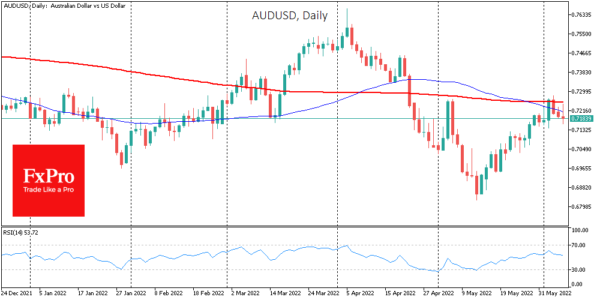 Nevertheless, looking at the prospects for Australia from a fundamental analysis perspective makes it doubtful that a bearish success in the Aussie would be anything more than a local victory. The tone of the RBA comments suggests that we could see a repeat of today’s move in another month. Since the RBA meets 11 times a year, rather than 7–8 or 4 as in many developed countries, the pace of policy tightening is greater than that of the competition.

It is worth noting that the Australian monetary authority has more room to raise rates. Record commodity prices support economic activity (GDP added 0.8% QoQ and 3.3% YoY in Q1) and spur currency inflows into the country, increasing the room for manoeuvre for the central bank.

Today we see a repeat of the pattern as the currency market reacted to the sharp rate hike in New Zealand. However, by zeroing in on its initial momentum, the NZDUSD strengthened by more than 2% in the subsequent five trading sessions, and the chances are high that the AUDUSD will repeat this pattern.

Furthermore, it is also worth bearing in mind that we are in a world where not every central bank can raise its rate by 50 points several times in a row without risking a recession. So, the Aussie might perform “above the market” in the medium term, naturally gaining on most competitors aside from the NZD and USD.