A popular gauge of U.S. consumer attitudes worsened this month, but fell less than expected following a small increase in April. Lately, inflation, which is running at the fastest pace in four decades, has been the main source of consternation for most Americans, as rising living costs have slashed real incomes, stretching household budgets thin and reducing purchasing power.

According to the Conference Board, its Consumer Confidence Index dropped to 106.04 in May from an upwardly revised figure of 108.6 in the previous period. Economists polled by Bloomberg News had forecast the index to slide to 103.9.

Digging deeper into the survey results, the present situation indicator, based on people’s assessment of current business and hiring conditions, dropped to 149.6 from 152.6. The mild deterioration in this component was driven solely by a perceived softening in the job market, a discouraging development for future consumption, the main driver of the country’s economic growth. In any case, the index remains at a strong level, signaling that activity did not contract further during the second quarter.

Elsewhere, the expectations index, which measures the short-term outlook for earnings, the business environment, and the jobs market, slid to 77.5 from 79, dragged down by concerns that the economy will not reaccelerate in the coming months. 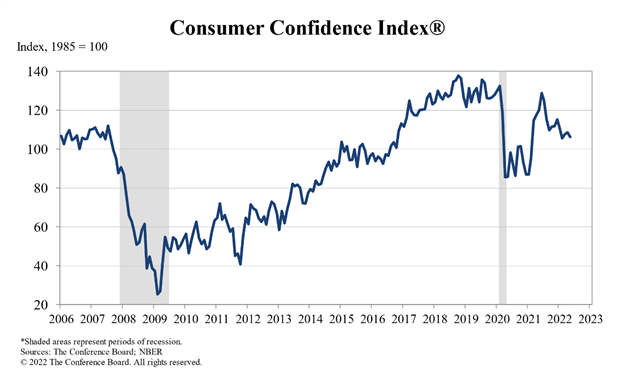 Can Lyft Stock Lift Itself Out Of Its Meltdown?

The slide in consumer confidence is cause for concern considering that household consumption accounts for roughly two-thirds of U.S. GDP. While recent data has shown that Americans do not always act as they feel, it is still important to monitor attitudes, as any pullback in spending in response to sour sentiment could spell trouble for the recovery.

The S&P 500 held most session’s losses after the survey results crossed the wires as Wall Street remains highly concerned about the possibility of a recession as the Fed presses ahead with its plans to tighten monetary policy aggressively. Traders will get another chance to assess the health of the economy this week, with key economic releases on the calendar, including May ISMs and Nonfarm payrolls. If the data shows further weakening, risk assets could struggle to mount a meaningful comeback in the near term.

Chart Art: Trend And Breakout Opportunities With AUD/USD and NZD/CAD