The May consumer price index will bring some much-needed excitement for traders on Friday (13:30 GMT) in an otherwise light week for US economic releases. With investors desperately seeking clues that inflation has peaked in America, the data could prove pivotal for Fed policymakers, who meet on June 14-15 for their next rate setting decision. The US dollar has been consolidating lately, unable to establish a clear direction amid some uncertainty about the Fed’s rate path beyond the July meeting.

There can be no denying that early signs of inflation peaking are emerging. CPI inflation moderated to 8.3% year-on-year in April and is expected to have held onto that clip in May. Core CPI is forecast to dip from 6.2% to 5.9% y/y, which would further bolster hopes that the worst of the price jumps is over. The PCE measure of inflation has also been on the soft side in the last couple of months. The core PCE price index – the Fed’s preferred metric – eased to 4.9% y/y in April after reaching 5.4% in February. 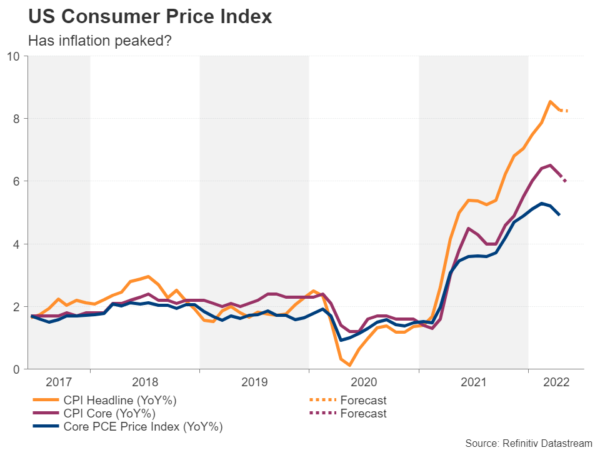 However, the month-on-month increase in headline CPI might raise some worries as it’s projected to have accelerated in May to 0.7%, which would dash expectations of a quick return to 2% inflation.

The Fed may be hesitant to pause

Several Fed officials, including Vice Chair Brainard, have hinted that there would have to be a substantial deceleration in inflation before being convinced that it’s no longer necessary to tighten policy with 50-basis-point increments. But not all FOMC members are as hawkish. Atlanta Fed President Raphael Bostic supports taking a pause in September to assess the impact of the latest rate hikes on the economy and on dampening inflationary pressures, although it’s worth pointing out that he’s not a voting member this year.

Technical analysis of US Crude, XAUUSD, and EURUSD for today (22 June 2022)

Still, if the annual CPI print misses the forecasts, this would probably be enough to buoy the markets as it would likely be interpreted as another sign that inflation is plateauing or has already done so. For policymakers, a more important question mark is how soon inflation will drop to within range of the Fed’s 2% target. That is something that will take a lot longer to transpire in the data, so until then, investors will seize on any indication that inflation is at a turning point.

In money markets, rate hike bets for the remainder of 2022 appear to be climaxing as they’ve been stuck around 200 basis points for the past month. Whilst it’s too soon to rule out further big rises in inflation, the focus for investors seems to be shifting towards negative surprises in the price readings after more than a year of constant positive shocks.

That could spell bad news for the dollar, which except against the anaemic Japanese yen, has not been able to surpass its early May highs. However, the greenback maintains a very bullish posture versus the yen and if the CPI numbers are stronger-than-expected, there could be further gains in store for the pair.

Dollar/yen is currently edging up towards the 138.2% Fibonacci extension of the May downtrend at 133.25. Overcoming this resistance would open the way for the 161.8% Fibonacci of 134.42. Slightly higher, the 135 level could obstruct further advances before the bulls set their sights on the 200% Fibonacci of 136.33.

However, should Friday’s report provide more convincing evidence that inflation is cooling off, dollar/yen is at risk of a downside reversal as it’s looking a little overbought right now. Initial support is likely to come in the 132 area if the pair heads down, with the 61.8% Fibonacci retracement level of 129.43 potentially halting further declines ahead of the 50-day moving average at 127.73.

The Fed is highly anticipated to hike rates by 50 bps at its June meeting. But any unexpected weakness in the CPI data might sway some FOMC members to chart a shallower dot plot over the course of the forecast period.

How You Can Use Your Trading Worries To Your Advantage