Last week, I thought the market was set up for another push higher… that sure didn’t happen!

Here’s the price action I was looking for:

“Right now, the market is holding the 20 EMA, but one push lower would take us to 402 – 405. That would line up with a key low volume node (LVN) as well as the Anchored Volume Weighted Average Prices (AVWAPs) from the recent lows and the May swing highs.

The longer we hold above this level, the higher the odds we break above the recent highs. Those highs line up with the late March AVWAP and the LVN we called out last week.”

And here’s what price did: 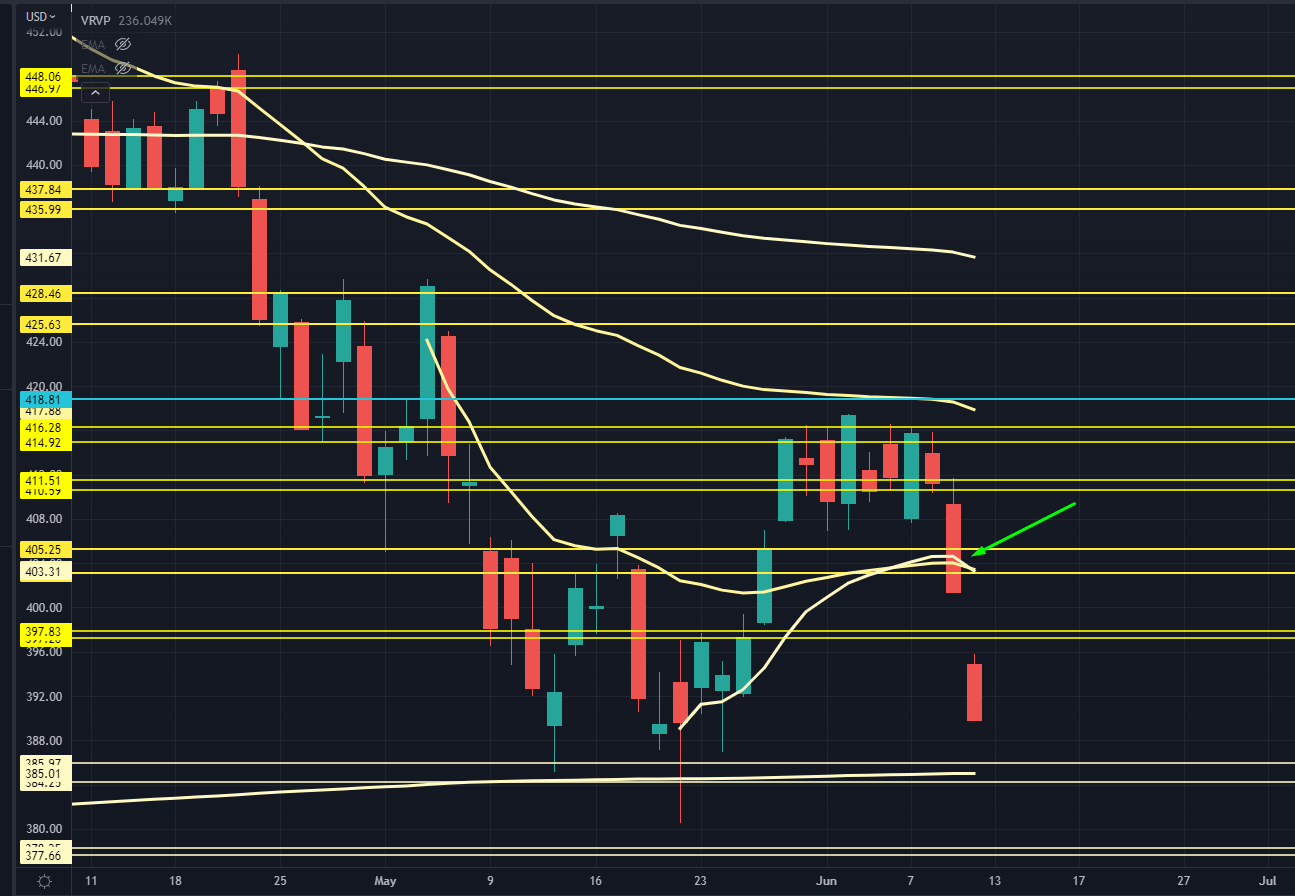 It slammed right through that key level. Once I saw that, I knew a followthrough could potentially test the lows.

Because that is where the HVN is… it acts as a magnet.

Now, we’re in “retest” territory. Honestly, the only way to get a clear read on this is to watch the nature of price action as it heads into this level.

There’s a swing AVWAP that’s seen upside price responses over the past few weeks, so if you’re bullish, you want to see aggressive buyers into 385-386.

Then, you can get a bullish scenario where the gap fills, and we make another higher low than retest last week’s highs.

The upside levels are the swing AVWAP from the March highs, which now line up with last week’s high.

That is the “rose-colored glasses” scenario.

We could see price acceptance at these levels. If so, the volume shelf at 397 comes into play, and any leftover holders at that level could bail because they’re scared about more losses.

And is not super relevant to the market’s short-term owners.

If the market finds enough sellers to take out the recent lows, we can look at a few levels underneath.

We could do a “screw-you” stop-loss run, where the market touches a sneaky level at 377-379 before making another move higher.

Under that, we have key levels at 369-371, and then 362-363. One of these could be a generational bottom… or just another bounce level as the bear market grinds higher.

They can also be effective re-short levels as the market tags the level from the other side.

I’ve zoomed in so you can see this a little better. The swing Anchored Volume Weighted Average Price (AVWAP) from the 2018 lows still is a valid level to play against and would be a textbook double bottom. A stop-loss run would happen at 274-275, which is a high possibility in large-cap tech.

To the upside, the gap-fill level at 298 will line up with the swing AVWAP from the May highs and recent lows.

We’ll probably see lots of short-term traders unload inventory they held through the gap down.

Above that, you have last week’s range highs. That will also collect the AVWAP from the March highs and the March 2020 lows.

If you’re bearish on large-cap tech, that would be a good “last gasp” point if we see a countertrend push higher.

We have decent relative strength in the Russell, but it had the same kind of breakdown that left many buyers trapped and looking for a way out.

There’s a nice “higher low” level to work with at 173-174. The index had probes underneath it in late May but still closed above it. I’d like to see how price acts into that level. 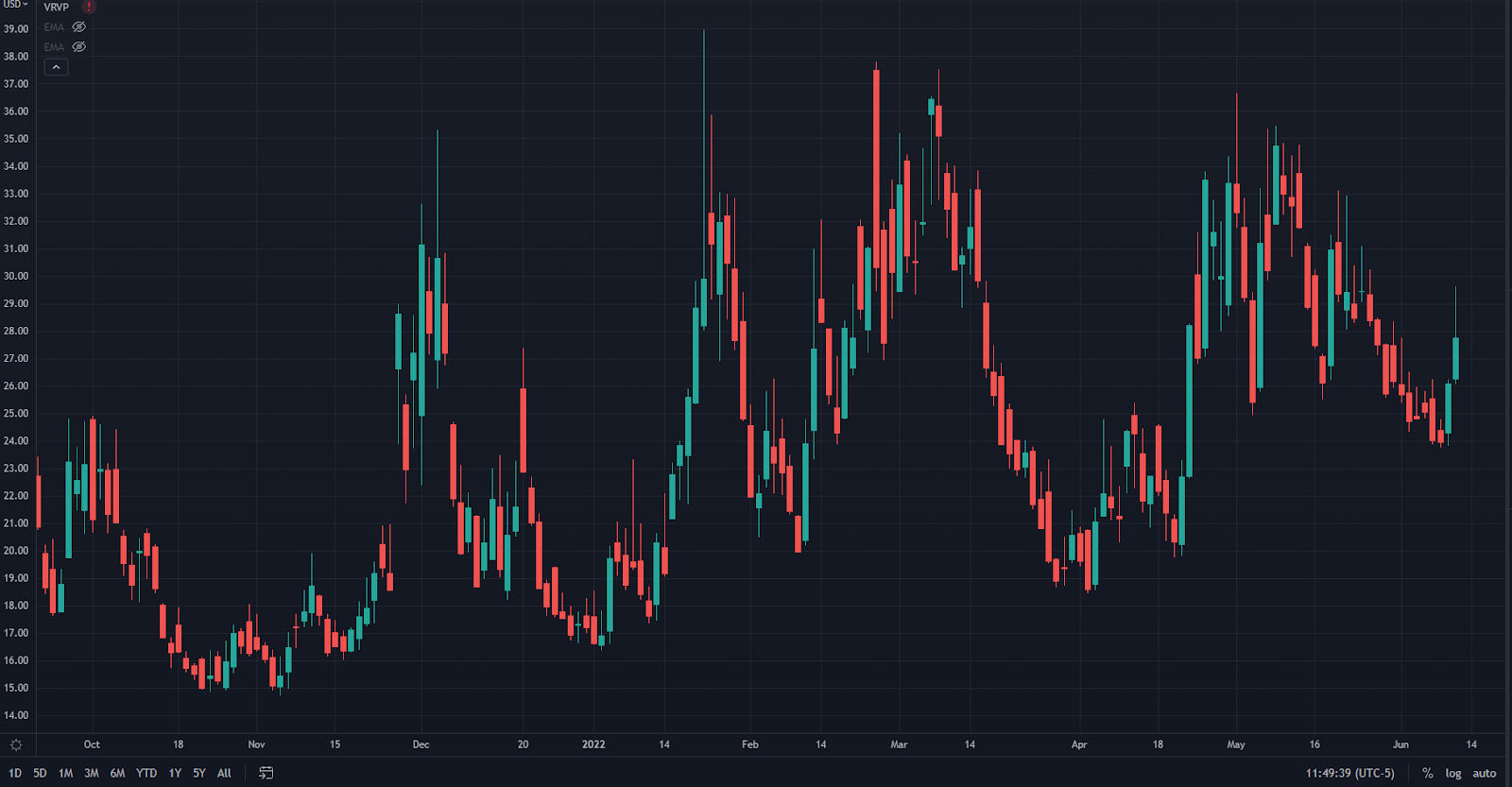 I’m watching 31 on the VIX. This index hasn’t held above that for a month, and it still feels like volatility markets are betting on improving liquidity soon.

This is a “here-or-there” setup. Either the VIX holds here…

Or the markets get really loose because participants net short vol or gamma will be forced to adjust. This can create an “open loop” in vol.

Be very careful if spot VIX takes out this trading range.

US Data Ahead of Possible 75 bp from FOMC later

SCALPING BY THE AUTHOR’S INDICATOR. I MADE GOOD MONEY! – Analytics & Forecasts –...