WTI futures rebounded off the eight-month low of 81.20 and reached the 20-day simple moving average (SMA) at 89.50. The technical oscillators are showing some contradicting signs. The MACD is surpassing its trigger line suggesting more gains; however, the stochastic is appearing overbought as it is ready to post a bearish crossover within its %K and %D lines.

Should the commodity manage to strengthen its positive momentum, the next resistance could come around 90.60. A break above this level could take the price until the 40-day SMA at 91.90 ahead of the short-term falling trend line near 93.90 and the 200-day SMA at 96.00, shifting the bias to a neutral one.

However, if prices are unable to break the 20-day SMA, the risk would remain to the downside with the eight-month trough at 81.20 coming into focus again. A drop lower would signal a resumption of the long-term downtrend that’s been developing since March. The next key support to watch lower down is the inside swing high of 72.73, registered in December 2021.

All in all, WTI crude oil futures seem to be in a downtrend, recording lower lows and lower highs in the short-term, while an advance above the 200-day SMA may change the outlook to neutral. 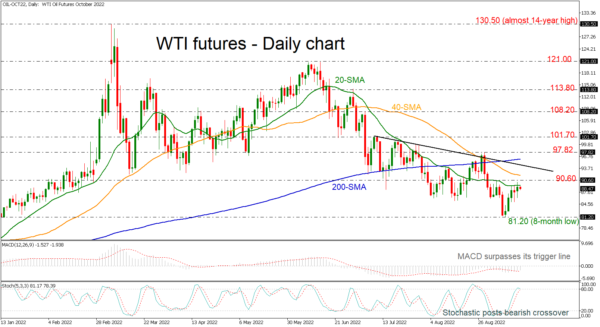 3 Things To Consider When Setting Up A Forex Trading Station