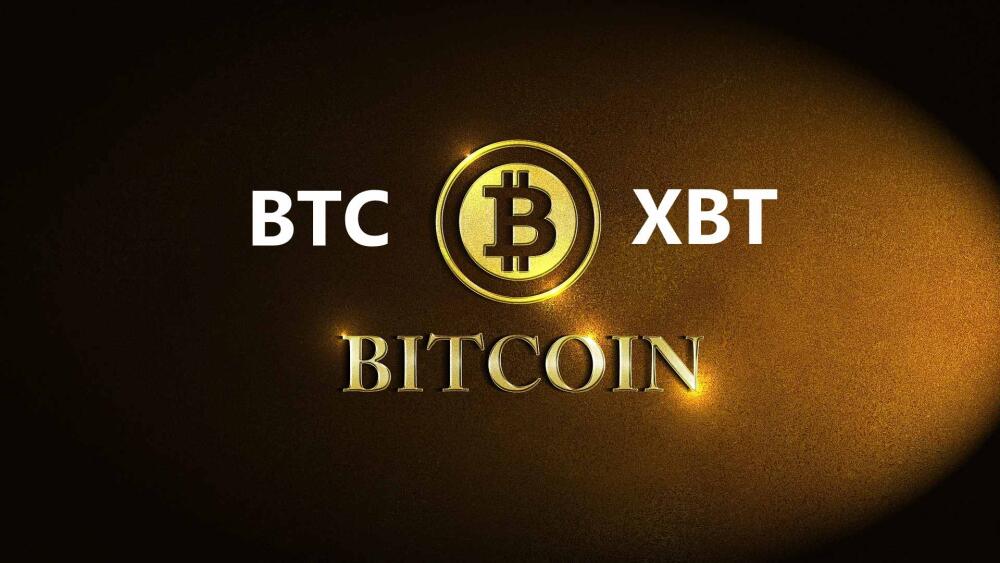 There has always been confusion between the terms BTC and XBT. Some people use them interchangeably, while others think they are different cryptocurrencies. So, is there any difference? In this article, we will dive deeper into the definition and history of Bitcoin and its tickers, find out if BTC and XBT are the same financial vehicles, explain how to buy them, and more.

The article covers the following subjects:

﻿Bitcoin is a decentralized cryptocurrency that was created in 2008 by an anonymous developer using the pseudonym Satoshi Nakamoto. It is the first and most well-known crypto, as well as the largest by market capitalization.

BTC is the ticker symbol for this currency. However, the process of its creation differed from the regular procedure. While stock symbols are selected by the related company, a cryptocurrency ticker is usually introduced by a developer. However, in case of the Bitcoin, its unknown creator didn’t decide this. Thus, the abbreviation BTC was chosen by the Bitcoin community. Even though the BTC ticker wasn’t officially registered, it has become widely recognizable worldwide and has been adopted by numerous crypto exchanges and trading platforms to represent Bitcoin cryptocurrency.

XBT is another ticker used to denote Bitcoin. It was introduced in 2013 on a Bloomberg machine and is often considered the international symbol for Bitcoin cryptocurrency, although BTC remains more common.

Where Does XBT Come From?

Although the BTC abbreviation was already widely known and used, the fast-growing popularity of this crypto required the legalization of its code. As it turned out, BTC didn’t comply with the International Standard Organization (ISO 4217) rules, which state that the first two letters of the ticker should stand for the name of the country, for example in USD, US denotes the United States, in GBP – GB represents Great Britain.

In the case of BTC, BT coincided with the initials of Bhutan. Moreover, Bitcoin is a non-sovereign currency, meaning that it doesn’t represent any particular country. Thus, it was decided to create a new symbol for it, following the ISO rules for transnational, also known as super-assets, such as gold, platinum, and others. The tickers for them always include an initial X, for example, the gold symbol is XAU, silver is represented by XAG, etc. Following the same logic, Bitcoin received an XBT international symbol.

Why Is XBT Confusing for Some People?

There are three main reasons why XBT is confusing for beginners and sometimes even for experienced traders.

Both BTC and XBT are Bitcoin tickers. However, some exchanges and platforms use XBT to represent this crypto, while others give preference to BTC. For example, Binance, Coinbase, and CoinMarketCap list Bitcoin as BTC. BitMEX, in contrast, uses the XBT ticker. There are also some examples of switching from one ticker to another. The popular crypto exchange Kraken, which was one of the first to adopt the XBT ticker, has recently changed it to BTC, yet sticking to XBT for futures and OTC trading. In addition, to avoid confusion, traders need to remember that the XBT ticker symbol is usually used on international markets and for trading CFDs and other derivatives.

Apart from Bitcoin, there are other cryptocurrencies with an X ticker symbol, which could result in even more confusion among inexperienced traders. However, in contrast to BTC vs. XBT, they all denote different currencies with their unique features. Some of the most common ones are listed below:

Traders may be confused not only by the fact that Bitcoin has two different but interchangeable tickers, but also by the wide variety of other cryptocurrencies built on the Bitcoin blockchain that have similar tickers. Their appearance was caused by numerous forks.

A fork occurs when the crypto community alters its blockchain protocol or its basic rules. Since 2013, when XBT was introduced, the Bitcoin blockchain has faced a number of such situations which resulted in the creation of such crypto tokens as Bitcoin Gold (BTG), Bitcoin Cash (BCH), Bitcoin Diamond (BTD), and others.

As mentioned before, BTC may be confused with the national currency of Bhutan – BTN (Bhutanese Ngultrum). Moreover, traders may wonder why the Bitcoin X-ticker was decided to be XBT, not XBC. The reason is that the XBC ISO ticker had already been taken before the launch of either BTC or XBT. It is used by the European Central Bank (ECB) to denote the European Unit of Account.

Is XBT the Same as BTC?

There is no difference between XBT and BTC. They are just two different codes for Bitcoin currency. The BTC abbreviation was suggested by the Bitcoin community and has been in use since the very beginning of this cryptocurrency. The XBT ticker, in turn, was introduced in 2013 by the ISO as an international Bitcoin symbol. Although the XBT term is not new on the financial market, it hasn’t achieved such wide recognition and adoption as BTC so far.

How to Buy XBT (BTC)

Before buying any cryptocurrency it’s important to educate yourself about this financial instrument and analyze if you are ready to accept its risks. Once you’ve decided to gain exposure to Bitcoin, here are the steps to follow.

Nowadays, a great variety of crypto exchanges and trading platforms come with unique features, benefits, and limitations. When opting for one of them, make sure it:

There are many different ways to pay for BTC. Here are the most popular of them.

To avoid confusion around Bitcoin, it’s important to be aware of its history. So far, it has been the largest crypto by market capitalization. However, how did it come to reach today’s price? Let’s have a closer look at the most significant steps:

Are There More Tickers for XBT?

Traders could become even more confused having realized that there are some other symbols for XBT. For example, some huge financial platforms, instead of BTC or XBT, use the NYXBT symbol to denote New York Stock Exchange Bitcoin Index; stock market investors are used to seeing Bitcoin as GBTC (Bitcoin Investment Trust ticker), and more.

Every cryptocurrency trader should know that both BTC and XBT currency codes represent Bitcoin and there is no difference between them. The BTC symbol extends back to the early years of Bitcoin history, while XBT was created later when this crypto became mainstream. Moreover, to avoid more confusion, investors should be aware that there are similar tickers of other cryptocurrencies based on the Bitcoin blockchain, such as BTG, BTH, and BTD, as well as other currencies with X-tickers, such as XRP, XMR, XLM, etc.

To buy XBT (BTC), first, you need to choose a trading platform with a high level of security, a wide choice of crypto instruments, etc. Then, you should decide on the most suitable payment method. The majority of trading platforms allow paying through various digital payment systems (Neteller, Skrill, etc.) as well as by credit/debit cards, other cryptocurrencies, bank wires, etc.

Is Bitcoin a Good Investment? Experts About Investing in BTC

Week Ahead – US Inflation on the Menu, BoC and RBNZ to Raise Rates

XETA and DXCHECK tokens are in the spotlight. Why’s that?

Is a Recession Now Inevitable?